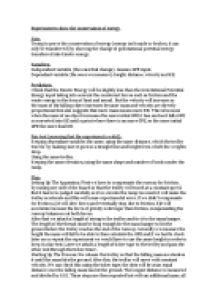 Practical showing the conservation of Energy

﻿Experiment to show the conservation of energy Aim: Trying to prove the conservation of energy (energy isn?t made or broken, it can only be transferred) by showing the change of gravitational potential energy transferred into kinetic energy. Variables: Independent variable (the ones that change): masses, GPE input. Dependant variable (the ones we measure): height, distance, velocity and KE. Prediction: I think that the Kinetic Energy will be slightly less than the Gravitational Potential Energy input taking into account the counteract forces such as friction and the waste energy in the form of heat and sound. But the velocity will increase as the mass of the falling object increases because mass and velocity are directly proportional this also suggests that more mass means more KE. This is because when the mass of an object increases the more initial GPE it has, and as it falls GPE is converted into KE until a point where there is no more GPE, so the more initial GPE the more final KE. Fair test (ensuring that the experiment is valid): Keeping dependant variables the same, using the same distance, which the trolley travels- by making sure it goes in a straight line and height from which the weights drop. ...read more.

The longest distance is measured and divided by 0.02. These steps are then repeated but with an additional mass, all experiments with the same falling mass MUST be repeated at least 3 times taking 5 measurements and controlling all dependant variables to make sure that the results are fair and that we have a wide range of the results making sure that we don?t depend our conclusions on a faulty result. Safety: The person measuring the height of the falling mas must keep a certain distance from the weights as they fall. The runway must be securely positioned to prevent it falling on anyone, they are also very heavy and require two people to carry it. Rulers can be used to make sure the trolleys don?t change direction and hurt somebody. Conclusion: We chose to plot this graph velocity against falling mass because they were independent variables and the rest stayed the same: MGH=1/2MxV stayed the same According to the table, the experiment didn?t actually prove the law of conservation of energy, the initial GPE and final KE would have had to be the same because we compensated friction that means no energy was to be wasted as heat or sound. ...read more.

e.g.: light gates that are circuits that have an opening between them and if it is interrupted a signal is sent to a computer or even data loggers could be used. Also compensating for friction is one of the main drawbacks in this experiment and should be kept a closer eye on or previously checking if the trolley travels at a constant velocity. The height must me measured well, because if the experiment is again repeated and the height isn?t right it would give the falling mass a greater GPE so the results wouldn?t be reliable. Validity is another very important aspect, the more readings the better because it is less likely to get unreliable results, rulers may be used to create a sort of railway for the trolley not to change direction so the distance travelled is always the same. For more experiments in this field, varying the height s in which the falling masses drop can prove that GPE depends on the height of an object. This also can demonstrate that with more GPE input more KE output, as while varying the heights the higher the object the more initial GPE so the more final KE. ...read more.