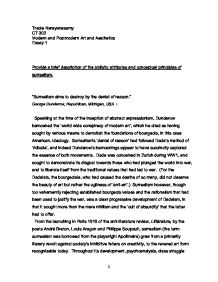 Provide a brief description of the stylistic attributes and conceptual principles of surrealism.

Tracie Narayanasamy CT 302 Modern and Postmodern Art and Aesthetics Essay 1 Provide a brief description of the stylistic attributes and conceptual principles of surrealism. "Surrealism aims to destroy by the denial of reason." George Dunderow, Republican, Michigan, USA 1 Speaking at the time of the inception of abstract expressionism, Dunderow bemoaned the 'world wide conspiracy of modern art', which he cited as having sought by various means to demolish the foundations of bourgeois, in this case American, ideology. Surrealism's 'denial of reason' had followed Dada's method of 'ridicule', and indeed Dunderow's bemoanings appear to have succinctly captured the essence of both movements. Dada was conceived in Zurich during WW1, and sought to demonstrate its disgust towards those who had plunged the world into war, and to liberate itself from the traditional values that had led to war. (For the Dadaists, the bourgeoisie, who had caused the deaths of so many, did not deserve the beauty of art but rather the ugliness of 'anti-art'.) Surrealism however, though too vehemently rejecting established bourgeois values and the rationalism that had been used to justify the war, was a clear progressive development of Dadaism, in that it sought more than the mere nihilism and the 'cult of absurdity' that the latter had to offer. ...read more.

According to Ernst, frottage was, "nothing but a technical medium, in order to increase the hallucinatory abilities of the spirit, to awaken visions automatically and to get rid of one's blindness." 4 Masson was a French painter who had been badly wounded in WW1. His experience of the horrors of trench warfare had led him to question human motivation and he became deeply interested in the non-rational artistic impulse. Masson's automatic drawings were, to put it succinctly, random scribbles on paper, whose suggested forms were then developed to become recognisable images. The idea of delving into the deepest recesses of the mind in the quest for greater, more authentic artistic creativity was not in of itself a new concept, yet what set the surrealists apart from their predecessors was that this method was to be put to political as well as artistic use. Among the surrealist's literary publications were two series of journals; The Surrealist Revolution (1924-29) and Surrealism at the service of the Revolution (1930-33). Although never quite finding 'the dialectical unity of art and revolution', "The other problem which presents itself to us is that of the social action to be adopted-action which, according to us, has its proper method in dialectical materialism, action which we cannot forego in as much as we ...read more.

Perhaps it can be said that although troubled with unresolved (and arguably unresolvable) political dilemmas, surrealism has sought to undermine the capitalist ethos by giving voice and substance to the unreal and irrational, thereby challenging the authenticity of rationality. In the words of Breton, "By surrealism we intend to account for nothing less than the manner in which it is possible today to make use of the magnificent and overwhelming spiritual legacy that has been handed down to us. We have accepted this legacy from the past, and surrealism can well say that the use to which it has been put has been to turn it to the routing of capitalist society." 9 Notes` 1 From 'Hidden Hands': A different history of modernism. Ch4 production. 1995 2 Internet article: Andr� Breton. What is Surrealism http://pers-www.wlv.ac.uk/~fa1871/whatsurr.html 3 Breton later corrected himself for his use of outside all esthetic or moral preoccupations, "It should have least have been said: conscious esthetic or moral preoccupations..." (p134, Read, H) while addressing the idealism of surrealism's intuitive first epoch. 4 Internet article on Max Ernst http://www.bessersprechen.de/balloonings/eernst.htm#ttt 5 Read, H: A concise history of modern painting, p134 6 Read, ibid, p141 7 From Modern Art and Modernism: Manet to Pollock. Programme 23 "Dal� & Surrealism" 8 One of many websites containing information on Cheval http://sadtomato.net/cheval.html 9 Internet article: Andr� Breton. ...read more.