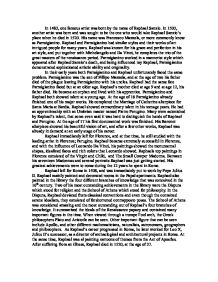 In 1483, one famous artist was born by the name of Raphael Sanzio. In 1503, another artist was born and was sought to be the one who would take Raphael Sanzio's place when he died in 1520. His name was Francesco Mazzola, or more commonly know as Parmigianino. Raphael and Parmigianino had similar styles and their works of art intrigued people for many years. Raphael was known for his grace and perfection in his art style, and put together with Michelangelo and Da Vinci, he completes the trio of the great masters of the renaissance period. Parmigianino worked in a mannerist style which appeared after Raphael Sanzio's death, and being influenced my Raphael, Parmigianino demonstrated sophisticated artistic ability and originality. In their early years both Parmigianino and Raphael unfortunately faced the same problem. Parmigianino was the son of Fillipo Mazzola, and at the age of two his father died of the plague leaving Parmigianino with his uncles. Raphael had the same fate Parmigianino faced but at an older age. ...read more.

Raphaels top paintings in Florence consisted of the Virgin and Child, and The Small Cowper Madonna. Between his seventeen Madonnas and several portraits Raphael was just getting started. His greatest achievements were to come during the 12 years he spent in Rome. Raphael left for Rome in 1508, and was immediately put to work by Pope Julius II. Raphael mainly painted and decorated rooms in the Papal apartments. Raphael also painted in the library the four different branches of knowledge that was conceived in the 16th century. Two of his most outstanding achievements in the library were the Disputa which stood for religion and the School of Athens which stood for philosophy. In the Disputa, Raphael deviated from classical conventions and even though the contained serene idealism, they consisted of forshortened contrapposto poses. The School of Athens was considered amazing and the most outstanding out of Raphael's four branches of knowledge. It summarized the ideals of the Renaissance papacy and contained many important figures in the time. ...read more.

After coming back from Rome, Parmigianino settled in Bologna for 3 years. During his three years, he painted Madenna with Saint Margaret and Saints, Madonna of the Rosa and Madonna with Saint Zachariah. By 1530, Parmigianino headed back to Parma and resided there for the rest of his life. During his time in Parma, he was commissioned to two altar pieces in 1531. He was to depict Saint Joseph and Saint John the Baptist. Parmigianino was given a salary and materials to complete the project, but by 1535, the project wasn't completed. AS time passed, Parmigianino became obsessed with etching and started to get him in trouble. Etching was the process of using strong acids and mordant to cut into unprotected parts of a metal surface. Parmigianino became a devotee of alchemy in 1538 and developed a fascination of magic. His obsession to trying to find new medium for his etchings fueled his obsession and forced him to complete little work during those times. Parmigianino ended up being thrown in jail for two months and was banned from completing the church. In 1540, PArmigianino died at the age of 37. ...read more.