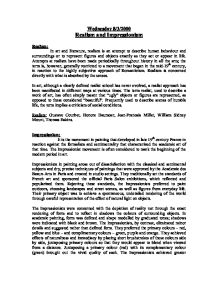 Wednesday 8/3/2000 Realism and Impressionism Realism: In art and literature, realism is an attempt to describe human behaviour and surroundings or to represent figures and objects exactly as they act or appear in life. Attempts at realism have been made periodically throughout history in all the arts; the term is, however, generally restricted to a movement that began in the mid-19th century, in reaction to the highly subjective approach of Romanticism. Realism is concerned directly with what is absorbed by the senses. In art, although a clearly defined realist school has never evolved, a realist approach has been manifested in different ways at various times. The term realist, used to describe a work of art, has often simply meant that "ugly" objects or figures are represented, as opposed to those considered "beautiful". ...read more.

Impressionism in painting arose out of dissatisfaction with the classical and sentimental subjects and dry, precise techniques of paintings that were approved by the Academie des Beaux-Arts in Paris and created in studio settings. They traditionally set the standards of French art and sponsored the official Paris Salon exhibitions, which reflected and popularized them. Rejecting these standards, the Impressionists preferred to paint outdoors, choosing landscapes and street scenes, as well as figures from everyday life. Their primary object was to achieve a spontaneous, undetailed rendering of the world through careful representation of the effect of natural light on objects. The Impressionists were concerned with the depiction of reality not through the exact rendering of form and to reflect in shadows the colours of surrounding objects. ...read more.