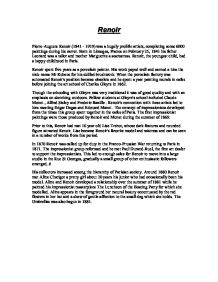 Renoir.Aline and Renoir developed a relationship over the summer of 1881 while he painted his impressionist masterpiece The Luncheon of the Boating Party for which she modelled.

Renoir Pierre-Auguste Renoir (1841 - 1919) was a hugely prolific artists, completing some 6000 paintings during his carrer. Born in Limoges, France on February 25, 1841 his father Leonard was a tailor and mother Marguerite a seamstress. Renoir, the youngest child, had a happy childhood in Paris. Renoir spent five years as a porcelain painter. His work payed well and earned a him the nick-name Mr Rubens for his skilled brushwork. When the porcelain factory was automated Renoir's position became obsolete and he spent a year painting murals in cafes before joining the art school of Charles Gleyre in 1862. Though the schooling with Gleyre was very traditional it was of good quality and with an emphasis on sketching outdoors. Fellow students at Gleyre's school included Claude Monet , Alfred Sisley and Frederic Bazille . ...read more.

# His collectors increased among the hierarchy of Parisian society. Around 1880 Renoir met Aline Charigot a pretty girl about 20 years his junior who had occasionally been his model. Aline and Renoir developed a relationship over the summer of 1881 while he painted his impressionist masterpiece The Luncheon of the Boating Party for which she modelled. Aline appears in the foreground her natural beauty eccentuated by the red flowers in her hat and a show of gentle affection to the small dog which she holds. The Umbrellas was also begun in 1881. (The Luncheon Boating Party) Aline later ended the relationship. Renoir responded by travelling first to Normandy, then to Algeria, then to Spain to see the work of Velazquez and then Italy to see Titian's work in Florence and Raphael in Rome. ...read more.

Chasing the pain relieving warmth Renoir spent more and more time in the south of France. The brilliant light, beauty and warmth combined to ease the pain and enthuse his creativity, but it was far from a cure. By 1912 Renoir's arms and legs were crippled and he was confined to a wheelchair. Despite all of this and the death of Aline in 1915, Renoir still continued to paint. Over his last few years of life Renoir began to sculpt with the assistance of two young sculptors to work as his hands, as his were too crippled to use. And to the end he continued to paint, working in a glass studio constructed in his garden and with his loyal aide Gabrielle having to push the paint brush between his twisted fingers. Pierre-Auguste Renoir died on the night of December 3, 1919 ...read more.