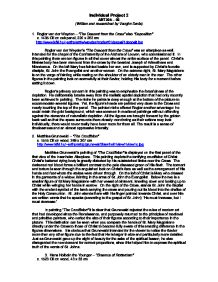 1. Rogier van der Weyden - "The Descent from the Cross" also "Deposition" c. 1435 Oil on oak panel, 220 x 262 cm http://www.kfki.hu/~arthp/art/w/weyden/rogier/01deposi/1deposit.jpg Rogier van der Weyden's "The Descent from the Cross" was an altarpiece as well, intended for the chapel of the Confraternity of the Archers of Leuven, who commissioned it. In this painting there are ten figures in all that cover almost the entire surface of the panel. Christ's lifeless body has been removed from the cross by the bearded Joseph of Arimathaea and Nicodemus. On the left Mary has fainted beside her son, and is supported by Christ's favorite disciple, St. John the Evangelist and another woman. On the extreme right, St. Mary Magdalene is on the verge of fainting while resting on the shoulder of an elderly man in the rear. The other figures in the painting look on sorrowfully at their Savior, holding His body for a moment before setting it down. ...read more.

This painting depicts the terrifying crucifixion of Christ. Christ's battered dying body is greatly distorted by his outstretched limbs over the Cross. The darkened red blood forms a brilliant contrast to the pale diseased green of His flesh. The torment and torture is seen through the anguished look on Christ's face as well as the arrangement of His hands and feet where the stakes were driven through. On the left of Christ is Mary who dressed in the garments of a widow, fainting in the arms of St. John the Evangelist. Below the two is a smaller figure of St Mary Magdalene with her vessel of ointment, kneeling down and looking up to Christ while wringing her hands in sorrow. On the right of the Cross, stands St. John the Baptist with the ancient symbol of the lamb carrying the cross and pouring out its blood into the chalice of the Holy Communion. St. John stands there with his finger pointed towards Christ, and over him are written words that he speaks (according to the gospel of St. ...read more.

The lines are not legible in the painting listed above but it is legible on a smaller version of the portrait in the museum of Basle. Holbein illustrates Erasmus as a writer, actively pursuing his vocation. Erasmus' head is in an upward position with his gaze lowered and focused entirely on the text he is writing. One hand is writing the comments as the other, decorated with rings, rests motionless holding the page still. Though his entire chamber is not visible, Holbein demonstrates his mastery of his vocation with the tapestry that has a pattern of plants and beasts and the wooden paneling in the background. Holbein's portrait of Erasmus not only demonstrates his technical mastery but also a comprehension and presentation of the significant features of the subject's personality and activity. Unlike other portraits of Erasmus, Holbein intended for this particular piece to be more intimate. It is painted as if he was close and looking over the writers shoulder. In fact Erasmus who befriended Holbein often asked him to illustrate his books. ...read more.