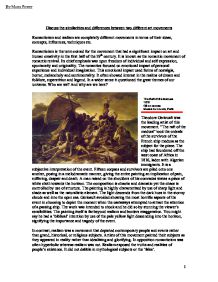 Discuss the similarities and differences between two different art movements Romanticism and realism are completely different movements in terms of their ideas, concepts, influences, techniques etc. Romanticism is the term coined for the movement that had a significant impact on art and human creativity in the first half of the 19th century. It is known as the romantic movement of romantic revival. Its chief emphasis was upon freedom of individual and self expression, spontaneity and originality. The romantics focused on emotional impact of personal experience and individual imagination. This emotional impact used forms of nostalgia, horror, melancholy and sentimentality. It often showed interest in the realms of dream and folklore, superstition and legend. In a wider sense it questioned the great themes of our universe. Who are we? And why are we here? Theodore Gericualt was the leading artist of this movement. "The raft of the medusa" took the ordeals of the survivors of the French ship medusa as the subject for the piece. ...read more.

The painting itself is far beyond realism and borders exaggeration. You might say he had a 'biblical' intention by use of the pale yellow light descending into the horizon, signifying the importance and tragedy of the event. In contrast, realism was a movement that depicted contemporary people and events rather than grand, historical, or religious subjects. Artists of this movement painted their subjects as they appeared in reality rather than idealizing and glorifying. In opposition romanticism was often hyperbolic whereas realism was not. Realism exposed the truths and realities of people's existence. It did not dabble in mythological subjects or the 'false'. However the movements themselves are similar in some ways. In terms of stylistic features both movements relied on individuality and originality. In addition, some paintings are spontaneous. They are also similar in their employment of shock tactics and confrontation of the viewer, taking them out of their comfort zone. An example of a realist artist who uses these shock tactics as a main theme in his work is Francisco Goya. ...read more.

There is almost a sense of a cliff hanger or semantic nuance because you know what will happen. The victims crumble pathetically and huddle together. One victim's shirt represents the innocence and purity of the 5000 Spanish civilians who were executed. In his last seconds of life he stands tall with his arms stretching outwards, open to the rifles, in a crucifixion fashion. The dead bodies and bloody corpses intensify the drama. Their warped, mangled and lifeless bodies suggest the courage of the other victims who knew they would join the corpses. The painting uses a powerful and expressive amount of color, highlighting the scene. One similarity with Gericault's painting is the use of, again, the yellow biblical light. The war is depicted as disgraceful and futile. There are no heroes, like some paintings in the romanticism era, only those that died and those that were killed. In conclusion, I have drawn both similarities and differences between both artists and art movements, having touched upon themes, subjects and stylistic features 1 ...read more.