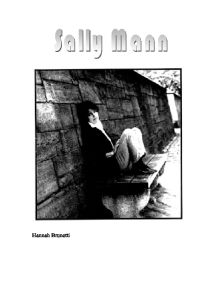 Hannah Brunetti Sally Mann was born in 1951 in Lexington, Virginia, where her father was the local doctor, and an amateur photographer. In 1969 she began her photography career while at Vermont Putney School. She also attended Bennington College for two years where she met and married Larry Mann, and then received her BA at Hollins College in 1974 and got her degree in writing in 1975. She also studied photography at the Praestegaard Film School, Aegean School Of Fine Arts, Apeiron and the Ansel Adams Yosemite Workshop. She made her professional debut in 1977 at the Corcoran Gallery of Art in Washington. From 1984 - 1991, Mann focused on family and children and their relationships. ...read more.

She has won numerous awards for her photography, some include: * Friends of Photography's {hotographer of the Year Award in 1995 * Three National Endowment for the Arts Fellowships(1982, 1988 and 1992) * John Simon Guggenheim Memorial Foundation Fellowship in 1987 * A professional fellowship from the Virginia Museum of Fine Arts (1982) * And an Artists in the Visual Arts Fellowship in 1989. She now lives and continues to work in her home land of Virginia with her husband. Her children have grown up and left. Sally Mann is currently working on an on-going project entitled "Marital Trust," which is about her 30-year partnership with husband, Larry. ...read more.

Because of the camera used, the photo looks sort of mystical, and there is a greeny tinge to it that makes some more detail stand out. The Perfect Tomato Sally Mann a mythic portrait of one daughter posed nude in a ballet stance up on her toes with arms outstretched on an outside table. Using the painstaking darkroom technique for which she is known, Mann effectively bathes her daughter in white light, while the two figures watching her are in dark shadows. In another example, "The Perfect Tomato," the same girl, naked, stands in one of the fundamental tiptoed positions of amateur ballet. Naturally, she draws the eye first. But at the center of the picture's foreground we find what the title promises, a perfect ripe tomato, nearly splitting its skin. ...read more.