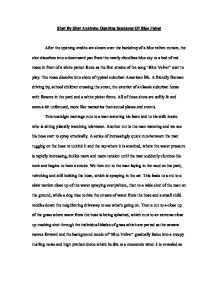 After the opening credits are shown over the backdrop of a blue velvet curtain, the shot dissolves into a downward pan from the nearly cloudless blue sky to a bed of red roses in front of a white picket fence as the first strains of the song "Blue Velvet" start to play. The roses dissolve into shots of typical suburban American life. A friendly fireman driving by, school children crossing the street, the exterior of a classic suburban home with flowers in the yard and a white picket fence. All of these shots are softly lit and seem a bit unfocused, more like memories than actual places and events.

This nostalgic montage cuts to a man watering his lawn and to his wife inside who is sitting placidly watching television. Another cut to the man watering and we see his hose start to spray erratically. A series of increasingly quick cuts between the man tugging on the hose to unkink it and the tap where it is attached, where the water pressure is rapidly increasing, builds more and more tension until the man suddenly clutches his neck and begins to have a stroke. We then cut to the man laying in the mud on his yard, twitching and still holding the hose, which is spraying in the air. This leads to a cut to a slow motion close up of the water spraying everywhere, then to a wide shot of the man on the ground, while a dog tries to bite the stream of water from the hose and a small child toddles down the neighboring driveway to see what's going on. Then a cut to a close up of the grass where water from the hose is being splashed, which cuts to an extreme close up tracking shot through the individual blades of grass which are parted as the camera moves forward and the background music of "Blue Velvet" gradually fades into a creepy rustling noise and high pitched drone which builds to a crescendo when it is revealed as being made by many beetles of which there are several disturbing close ups. These are starkly lit shots that, due to the erratic movement and low light, give the viewer a sense of unease and disgust.

This opening sequence serves to set the tone of the entire film and almost acts as a thesis for it. Its basic message is even in the things that seem perfect, there is ugliness and decay beneath the surface. The man having the stroke is meant to upset the audience and make them uneasy after seeing the idyllic scenes of suburban life. But the man's stroke is just the beginning as the audience is taken deeper into the unknown and witnesses the horrific looking beetles as they fight, right under the bright green grass on a typical lawn in suburbia. The contrast in lighting styles between the soft sunny neighborhood and the dark shadowed insect scene establish the co-existence of two separate worlds, one of innocence and happiness, the other of filth and violence, neither aware of the other.