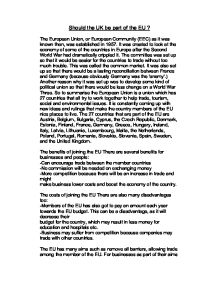 Should the UK be part of the EU ?

Should the UK be part of the EU ? The European Union, or European Community (EEC) as it was known then, was established in 1957. It was created to look at the economy of some of the countries in Europe after the Second World War had dramatically crippled it. The committee was set up so that it would be easier for the countries to trade without too much trouble. This was called the common market. It was also set up so that there would be a lasting reconciliation between France and Germany (because obviously Germany was the 'enemy'.) Another reason why it was set up was to develop some kind of political union so that there would be less change on a World War Three. So to summarise the European Union is a union which has 27 countries that all try to work together to help trade, tourism, social and environmental issues. ...read more.

-Business may suffer from competition because companies may trade with other countries. The EU has many aims such as remove all barriers, allowing trade among the member of the EU. For businesses as part of their aims and objectives, it is to maximise sales and to improve the quality of a product while being competitive with other rival businesses. Investment also encourages businesses to compete. Economically the EU spreads its wealth evenly. Allowing people, goods services and, also introducing free movement and capital making it possible to exchange and invest in money anywhere in the EU. Because of the Single Market, European businesses are selling to a market where there are over 458 million people, which is making it harder for smaller businesses to make any money at all because all the lager foreign companies are taking business away because they can offer product for much cheaper price by importing it which affects small business in the UK but can also be an advantage for lager businesses that are well know over Europe. ...read more.

It would work if they made sure that the foreigners coming in were properly qualified for the job there trying to apply for and the same for UK people who are going to work in county abroad these would stop foreign people from tacking all the good jobs because most are poorly qualified. I think that the UK should be part of the EU because overall it is a good thing because it making it easier for people to travel and trade abroad and keeps the countries in the EU in contact so it will prevent wars within Europe there is a few problems with the EU rules and some of its aims aren't that good for the people of the UK but the problems are solvable and properly will be in a few years. The best reason for join the EU is that it is trying to prevent global warming, which is going to be a major problem in years to come and trying to prevent this is key if we want to carry on with life the way we do today. ...read more.