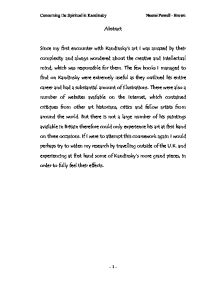 Since my first encounter with Kandinsky's art I was amazed by their complexity and always wondered about the creative and intellectual mind, which was responsible for them.

Abstract Since my first encounter with Kandinsky's art I was amazed by their complexity and always wondered about the creative and intellectual mind, which was responsible for them. The few books I managed to find on Kandinsky were extremely useful as they outlined his entire career and had a substantial amount of illustrations. There were also a number of websites available on the Internet, which contained critiques from other art historians, critics and fellow artists from around the world. But there is not a large number of his paintings available in Britain therefore could only experience his art at first hand on three occasions. If I were to attempt this coursework again I would perhaps try to widen my research by travelling outside of the U.K. and experiencing at first hand some of Kandinsky's more grand pieces, in order to fully feel their effects. Introduction Upon my first encounter with Kandinsky's painting, my eyes and indeed my mind were overcome with a sense of puzzlement, as it seemed impossible to decipher what lay beneath his passionate use of colour and distorted forms. Kandinsky hoped by freeing colour from its representational restrictions, it, like music could conjure up a series of emotions in the soul of viewer, reinforced by corresponding forms. Throughout this essay, I will follow Kandinsky's quest for a pure, abstract art and attempt to determine whether his passionate belief in this spiritual art and his theories on its effects on the soul, can truly be felt and appreciated by the average viewer, who at first glance would most likely view Kandinsky's paintings as simply abstract. Kandinsky was indeed a visionary, an artist who through his theoretical ideas of creating a new pictorial language sought to revolutionize the art of the twentieth-century. Regarded as the founder of abstract painting, he broke free from arts traditional limitations and invented the first painting for paintings sake, whereby the dissolution of the object and subsequent promotion of colour and form became means of expression in their own right. ...read more.

There, with only three of his paintings they managed to provide insights into a dramatic development that turned out to be pivotal for twentieth-century painting. One of which, Murnau - The Garden II (1910) (see Appendix 1, fig. 2) shows clearly how Kandinsky developed a pictorial language derived (or abstracted) from nature in the landscapes of Murnau. Here, certain aspects of the landscape are still visible i.e. the cloud, the row of houses on a steep incline and the foreground sunflowers. Instead of representation, Kandinsky gives us the strength and quality of the colours - the bright yellow sunflowers and the solid bold blue sky, juxtaposed with the energetic rhythms set up by the relationship between forms, and the expressive 'handwriting' of the brushstrokes. Conventional perspective has here given way to a more two-dimensional manner of representation. The undefined outline of each element and blurring colour zones show he was already moving away from figurative art and beginning to play around with the distortion of the object. "On the Spiritual in Art" In 1909, Kandinsky wrote the essay On the Spiritual in Art (�ber das Geistige in der Kunst) a treatise containing his ideas and theories about a new modern art. This book, along with the Blaue Reiter Almanac has been ranked as one of the most influential upon twentieth-century art. In it he emphasizes the importance of the "internal necessity", the idea that painting should grow from the internal voice of the painter, therefore the picture would be released from external subjectivity and instead based on our inner impressions. The book is comprised of two sections, the first containing a series of philosophical reflections on art, and the second is a thesis on colour and the power he believed it held. He begins the first section by debating the different artistic principles of past eras, how its need for imitation could create only at best soulless works empty of any internal meaning. ...read more.

However, despite now understanding why Kandinsky chose to take such a revolutionary stance in creating a new pictorial language, when encountered with one of his more abstract paintings, I am still slightly bewildered. My artistic eye is still very much untrained therefore cannot easily deconstruct and analyse a painting filled with complex abstract forms and an unnatural use of colour which denies all traditional laws of perspective. Nevertheless, regardless of this, I still hold a particular enjoyment in Kandinsky's art, as to me, it represents a true freedom of expression spoken from the heart and brought to life only by colour and form. Kandinsky hoped that by gradually concealing the object, the painting would subsequently become infused by colour and form grown from the internal necessity, producing a psychological effect on the soul of the viewer. He wanted not for his paintings to be deciphered for content but for each form reinforced by a corresponding colour, to come alive in the eyes of the viewer thus creating its own content. Having taken this on board, I now realize that it can be pointless looking for a meaning behind Kandinsky's paintings as it won't necessarily be found. But I believe it is possible for everyone to love and appreciate his paintings for what we can see - a canvas filled with a poetic arrangement of colour and abstract forms, only then can we truly feel the possible emotional effects which they evoke. Illustrations Appendix 1 Fig. 1 Couple Riding, 1906/07 Reitendes Paar, Oil on canvas, 55 x 50.5 Munich, Stadtische Galerie im Lenbachhaus Fig. 2 Murnau - The Garden II, 1910 Murnau - Der Garten II Oil on board, 67 x 51 cm Mr and Mrs Merzbacher, the Merzbacher Foundation Illustrations Appendix 1 Fig. 3 Composition IV, 1911 Komposition IV, Oil on canvas, 159.5 x 250.5 cm D�sseldorf, Kunstsammlung Nordrhein-Westfalen Fig. 4 Section for Composition IV, 1910 Komposition IV, Oil Study, 94.5 x 130 cm London, Tate Gallery Illustrations Appendix 1 Fig. 5 Improvisation 26 (Rowing), 1912 Improvisation 26 (Rudern), Oil on canvas, 97 x 107. ...read more.