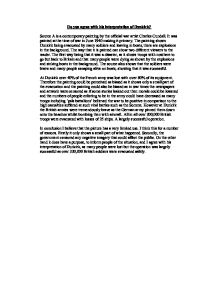 Source A is a contemporary painting by the official war artist Charles Cundall. It was painted at the time

Do you agree with his interpretation of Dunkirk? Source A is a contemporary painting by the official war artist Charles Cundall. It was painted at the time of war in June 1940 making it primary. The painting shows Dunkirk being evacuated by many soldiers and leaving in boats, there are explosions in the background. The way that it is painted can show two different viewers to the reader. ...read more.

At Dunkirk over 40% of the French army was lost with over 80% of its equipment. Therefore the painting could be perceived as biased as it shows only a small part of the evacuation and the painting could also be biased as in war times the newspapers and artwork were censored as if some stories leaked out then morale could be lowered and the numbers of people enlisting to be in the army could have decreased as many troops including 'pals battalions' believed the war to be positive in comparison to the high casualties suffered at such vital battles such as the Somme. ...read more.

All in all over 300,000 British troops were evacuated with losses of 25 ships. A largely successful operation. In conclusion I believe that the picture has a very limited use. I think this for a number of reasons. Firstly it only shows a small part of what happened. Secondly, the government censored any negative imagery that could affect the public. On the other hand it does have a purpose, to inform people of the situation, and I agree with his interpretation of Dunkirk, as many people were lost but the operation was largely successful as over 330,000 British soldiers were evacuated safely. ...read more.