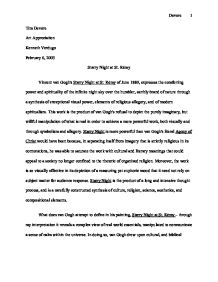 Tim Devore Art Appreciation Kenneth Verdugo February 6, 2003 Starry Night at St. R�my Vincent van Gogh's Starry Night at St. R�my of June 1889, expresses the comforting power and spirituality of the infinite night sky over the humbler, earthly brand of nature through a synthesis of exceptional visual power, elements of religious allegory, and of modern spiritualism. This work is the product of van Gogh's refusal to depict the purely imaginary, but willful manipulation of what is real in order to achieve a more powerful work, both visually and through symbolism and allegory. Starry Night is more powerful than van Gogh's literal Agony of Christ would have been because, in separating itself from imagery that is strictly religious in its connotations, he was able to saturate the work with cultural and literary meanings that could appeal to a society no longer confined to the rhetoric of organized religion. Moreover, the work is so visually effective in its depiction of a reassuring yet euphoric mood that it need not rely on subject matter for audience response. ...read more.

These features make the church the most motionless building of all by denying it the motion of the brush strokes and giving it the solidity of a definite form. Calming blue and purple dominate the painting's color scheme, with moonlight, starlight and a band of colored light close to the horizon containing mostly yellows, along with points of red and orange. The moon itself is a yellow-orange, while the two spiraling bands in the sky are greenish-blue in hue. Green tints highlight the glows of all the celestial features and tint the plant life on the ground. Greys and reds are characteristic of the houses, with orange indicating houselights, and powder blue filling in the lines of the church tower. Finally, the writhing lines that define the dark green cypress' lines are a rich reddish brown and near-olive green, causing it to emerge as a sharply defined profile against the vivid colors of the sky and purple-greens of the landscape below. Van Gogh was a naturalist who committed to representing the real. ...read more.

In a letter to his brother Theo, van Gogh writes: ...Looking at the stars always makes me dream, as simply as I dream over the black dots representing towns and villages on a map. Why, I ask myself, shouldn't the shining dots be as accessible as the black dots on the map of France? Just as we take the train to get to Tarascon or Rouen, we take death to reach a star. One thing undoubtedly true in this reasoning is that we cannot get to a star while we are alive, any more than we can take the train when we are dead. So to me it seems possible that cholera, gravel, tuberculosis and cancer are the celestial means of locomotion, just as steamboats, buses and railways are the terrestrial means. To die quietly of old age would be to go there on foot (Van Gogh, 605). It is van Gogh's unselfishness toward his art that has allowed me to honor Starry Night at St. R�my. Through his unrelenting determination, van Gogh was able to capture one night in a history of millions and have it live for eternity. Current Location: The Museum of Modern Art, New York. Acquired through the Lillie P. Bliss Bequest. ...read more.