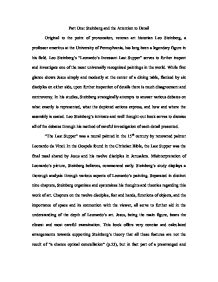 Steinberg and the Attention to Detail

Part One: Steinberg and the Attention to Detail Original to the point of provocation, veteran art historian Leo Steinberg, a professor emeritus at the University of Pennsylvania, has long been a legendary figure in his field. Leo Steinberg's "Leonardo's Incessant Last Supper" serves to further inspect and investigate one of the most universally recognized paintings in the world. While first glance shows Jesus simply and modestly at the center of a dining table, flanked by six disciples on either side, upon further inspection of details there is much disagreement and controversy. In his studies, Steinberg strategically attempts to answer various debates on what exactly is represented, what the depicted actions express, and how and where the assembly is seated. Leo Steinberg's intricate and well thought-out book serves to dismiss all of the debates through his method of careful investigation of each detail presented. "The Last Supper" was a mural painted in the 15th century by renowned painter Leonardo da Vinci. In the Gospels found in the Christian Bible, the Last Supper was the final meal shared by Jesus and his twelve disciples in Jerusalem. Misinterpretation of Leonardo's picture, Steinberg believes, commenced early. Steinberg's study displays a thorough analysis through various aspects of Leonardo's painting. ...read more.

Always, the perspective construction swerves dramatically inward, as if on hinges: "no depicted interior in Renaissance painting is so prone to distortion as one shuffles about" (p.119). In fact, as Steinberg shows with the help of a shoebox diorama, the "perspective comes right" (p.121) at a single spot in the room, on the eye level with Christ, several meters elevated over the floor of the refectory. From every other vantage point, the perfectly rectangular perspective construction is "driven toward triangularity" by the eye; the space cranes toward the perfection of the Trinity, and achieves it only at the level of Christ himself. Leonardo's construction, says Steinberg, is thus both mathematically precise and allows perspective to aid in narrative symbolism, choreography, and iconography. This method of interpretation raises important questions about the practice of iconography, or writing with images. Steinberg elaborates that Leonardo's unusual perspective has relevance insofar as it gives us information about the picture's story. This kind of scholarly method of reading works of art is through the finding of profound meanings disguised in painted objects and in its connection with the viewer. Leo Steinberg's argument of the importance of detail is furthered through his intricate study of the twelve disciples and notably the person of Jesus. ...read more.

Andrew displays himself "with his hands spread open shows his palms, and shrugs his shoulders up to his ears, making a mouth of astonishment" (p.97). The most important and most critiqued gesture, his hands, are said to "resonate with ulterior meanings" (p.98). As a reaction to the announcement of the betrayal Andrew raises his hands in a sense of shock and disbelief. It is important to note that Andrew is the only disciple to demonstrate such a gesture. Steinberg theorizes that it is because he was "first called of the Apostles" (p.100) and that he was arguably the most loyal and faithful apostle. For this reason it is only he who displays "astonished hands" (p.100) upon hearing the news of the approaching crime. Compared to Judas, Andrew's complexion and attitude towards the betrayal is completely opposite. In his book, Steinberg does not announce his theories to be absolute truth but rather acknowledges the importance of a collaboration of critics and opinions. Steinberg argues that it is only through the disputes and differences among keen observers, which ultimately enables the best understanding of Leonardo's art. His books makes clear "that every multivalency in the painting earns praise for being straightforward and clear even though disagreements over what it is that is clearly presented never subside" and that "the task throughout was to discover what art could be made to do" (p.194). ...read more.