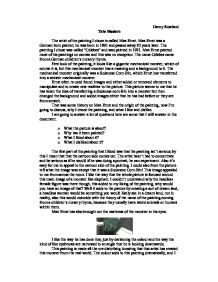 Danny Rowland Tate Modern The artist of the painting I chose is called Max Ernst. Max Ernst was a German born painter; he was born in 1891 and passed away 85 years later. The painting I chose was called "Celebes" and was painted in 1921. Max Ernst painted most of his paintings on canvas and this was no exception. The name Celebes came from a German children's nursery rhyme. First look of the painting, it looks like a gigantic mechanical monster, which of course it is, but this mechanical monster has a meaning and a background to it. The mechanical monster originally was a Sudanese Corn-Bin, which Ernst has transferred into a sinister mechanical monster. Ernst often re-used found images and either added or removed elements to manipulate and to create new realities to the picture. This picture seems to me that he has taken the idea of transferring a Sudanese corn-Bin into a monster but then changed the background and added images either that he has had before or they are from scratch. ...read more.

This image appealed to me from across the room. I like the way that the whole picture is focused around this main image of a monster like elephant. I couldn't understand why the headless female figure was there though, this added to my liking of the painting, why would you have an image of that? Well it adds to the picture by creating a sort of dream land, a headless woman would be something you would likely see in a dream land, not in reality, also this would coincide with the theory of the name of the painting coming from a children's nursery rhyme, because they usually have weird animals or humans within them. Max Ernst has also brought out the nastiness of the monster in his eyes. I like the way he has done this; just by darkening the colour and the way the kind of like eyebrows are narrowed to an angle that he is looking downwards. ...read more.

o What effect does it give? o What does it add to the picture? These are the questions I'm trying to answer, but I can't find any logical answer. This is why I don't like this part of the painting because I cant understand why it is there. There is also another part of the painting that I don't understand why it is there. It is a part of the sky. There is like a flying eel, I gather that this is a part of the dreamland, but surely this is going over the top. Another part, which has no logic at all, is the pencil at the bottom of the elephant like monster. This I think is suppost to show the size of the monster to show how big it actually is, compared to a small pencil. Overall the painting has a dreamland feel to it, and this is what I like about it. I suppose its because I'm a kid really, and find it easier to understand cartoon painting instead of portraits. The whole painting of Celebes is on the next page. ...read more.