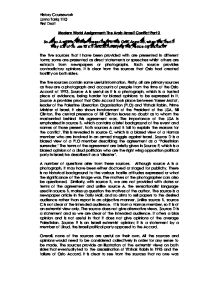 Modern World Assignment: The Arab-Israeli Conflict Part 2 Sources A-E differ in their assessment of the Oslo Accords. Does this mean they are of no use to an historian studying the peace agreement? The five sources that I have been provided with are presented in different forms; some are presented as direct statements or speeches whilst others are extracts from newspapers or photographs. Each source provides contradictory opinions. It is clear from the sources that Oslo had created hostility on both sides. The five sources contain some useful information. Firstly, all are primary sources as they are a photograph and accounts of people from the time of the Oslo Accord of 1993. ...read more.

This is revealed in source C, which is a biased view of a Hamas member who are involved in an armed struggle against Israel. Source D is a biased view of a PLO member describing the agreement as a 'Palestinian surrender.' The terms of the agreement are briefly given in Source E, which is a biased opinion of a Likud politician who are the right wing opposition political party in Israel; he describes it as a 'disaster'. A number of questions arise from these sources. Although source A is a photograph, it may have been either doctored or staged for publicity. There is no historical background to the various hostile attitudes expressed or what the significance of the image was. ...read more.

Source E is an Israeli extremist opinion; it is a statement by a member of Likud, the Israeli political party opposed to the Accord. Overall, none of the sources are useful on their own. All the sources and opinions would need to be considered collectively in order for any sense to be made. The sources provide an illustration of the extremist views on both sides that eventually led to the assassination of Yitzhak Rabin in 1995 and the failure of Oslo Accord, it is clear to see from the sources that no one was content with the Accord, and may be useful to historians to explain why the Oslo Accord was unsuccessful. ?? ?? ?? ?? History Coursework Uzma Tariq 11Q First Draft ...read more.