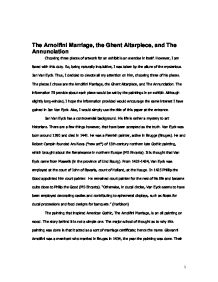 The Arnolfini Marriage, the Ghent Altarpiece, and The Annunciation

The Arnolfini Marriage, the Ghent Altarpiece, and The Annunciation Choosing three pieces of artwork for an exhibit is an exercise in itself. However, I am faced with this duty. So, being naturally inquisitive, I was taken by the allure of the mysterious Jan Van Eyck. Thus, I decided to devote all my attention on him, choosing three of his pieces. The pieces I chose are the Arnolfini Marriage, the Ghent Altarpiece, and The Annunciation. The information I'll provide about each piece would be set by the paintings in an exhibit. Although slightly long-winded, I hope the information provided would encourage the same interest I have gained in Jan Van Eyck. Also, I would simply use the title of this paper at the entrance. Jan Van Eyck has a controversial background. His life is rather a mystery to art historians. There are a few things however, that have been accepted as the truth. Van Eyck was born around 1390 and died in 1441. He was a Flemish painter, active in Brugge (Bruges). He and Robert Campin founded Ars Nova ("new art") of 15th-century northern late Gothic painting, which brought about the Renaissance in northern Europe (MS Encarta). It is thought that Van Eyck came from Maaseik (in the province of Lind Bourg). From 1422-1424, Van Eyck was employed at the court of John of Bavaria, count of Holland, at the Hauge. ...read more.

It is unlikely the writing on the wall was actually there. It is thought to be a detail meant to attribute the painting to himself without interrupting it. Above the mirror is written extremely small yet clearly "Johannes de eyck fuit hic 1434" (Jan Van Eyck was here, 1434). "Normally a work of art in the fifteenth century would have been signed, "Jan Van Eyck made this." The wording here specifically refers to a witness to a legal document." (Stokstad, 628) There are also a few symbols of faith. In the painting is a dog between the Arnolfini's feet. Dogs are considered faithful companions. On the window ledge there is fruit that could symbolize fertility and the fall from Paradise in the Bible. Also the shoes by Giovanni Arnolfini's feet are thought to allude to the sanctity of marriage. (Pioch, Web Museum) The next piece I find very interesting, and hope many others will too, is the Ghent Altarpiece. The Ghent Altarpiece is Van Eyck's earliest known work (Stokstad, 626). This painting is made with oil on panel and extremely large. Finished in 1432, the altarpiece was roughly 11.5' x 7.5' closed and 11.5' x 15' open. The altarpiece is rather difficult to describe. That is because it opens twice to show two separate scenes, with one set of inner wings. ...read more.

The letters form the Latin equivalent of "Hail, full of grace" and "Behold, the handmaiden of the Lord," spoken by Gabriel and the Virgin, respectively. As in all of Van Eyck's work there are many symbolic points in this painting. A dove above the Virgin and Gabriel symbolizes the Holy Spirit. A stained glass window of God (surrounded on either side by two wall paintings of Moses) is parallel to three windows enclosing Mary. The three windows represent the Father, the Son, and the Holy Spirit. The juxtaposition of the three windows to the stained glass one represents the coming of a new era. White lilies in a vase by her feet symbolize Mary. The floor tiles are decorated with signs of the zodiac that indicate the date of Annunciation (March 25). Lastly, the placement of the figures in a new church suggests that Mary is the new Christian Church (Stokstad, 18-19). During the Middle Ages, the Church was the most powerful entity in Europe. The Church even had a great amount of say over political decisions. The religious art of the fifteenth century mirrored the political, social, and economic power of the Church. (Harbison) Each of the three paintings described in this painting contain religious references. In the Arnolfini Marriage there is the candle, and St. Margaret on the chair back. The entire Ghent Altarpiece is a religious painting. In the Annunciation, another entirely religious work, there is not only Gabriel and the Virgin but the windows as well. ...read more.