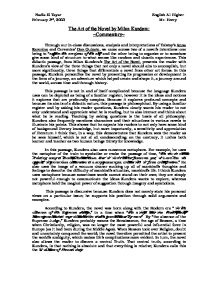 The Art of the Novel by Milan Kundera.

The Art of the Novel by Milan Kundera: ~Commentary~ Through our in-class discussions, analysis and interpretations of Tolstoy's Anna Karenina and Cervantes' Don Quixote, we came across two of a novel's intentions: one being to "explore the enigma of the self" and the other being to organize or to somehow give some kind of structure to what seems like random and chaotic experiences. This didactic passage, from Milan Kundera's The Art of the Novel, presents the reader with Kundera's view of the three things that not only a novel should aim to accomplish, but more significantly, three things that differentiate a novel from other art forms. In this passage, Kundera personifies the novel by presenting its progression or development in the form of a journey, an adventure which helped create and shape it, a journey around the world, across time and through history. This passage is not in and of itself complicated because the language Kundera uses can be depicted as being of a familiar register, however it is the ideas and notions it explores that are profoundly complex. ...read more.

This passage is discursive because Kundera does not merely state his personal views on a particular issue; he supports his position through solid arguments and examples. According to Kundera, the novel was born along with the Modern era "in the absence of the Supreme Judge," in a time when "the single divine Truth [was] decomposed into myriad relative truths parceled out by men." By "the absence of the Supreme Judge," Kundera probably means the Renaissance, the age of Reason, a time when Christianity, religion, was no longer the most powerful and influential force in Europe (as it had been during the Middle Ages). When Reason took over Religion, doubt and uncertainty conquered the world; the novel therefore permitted the artist to present the world's ambiguity, which makes life's complications more evident. In turn, the novel also allows the reader to discern a central Truth. That central truth, according to Kundera, is that nothing is absolute and that everything is relative; Kundera calls this the Wisdom of Uncertainty. ...read more.

However, with the passage of time, the advent of the Industrial Revolution, "the distant horizon disappeared behind the modern structures." The "modern structures", the law, the buildings, the industries, the cities, "the world of money and crime" symbolize confinement. As time continued to pass, the horizon started to shrink even more, until it became a barrier, as in Flaubert's Emma Bovary, in which the main character is a woman whose life is reduced to dreams and illusions of romance and adventure, that lied beyond that frontier. Finally, as history turned into the twentieth century, with Kafka's Metamorphosis, the setting is reduced to a single room in which a man is trapped and literally left with his thoughts and feelings as his sole source of humanity. Thus was extinguished man's illusion of an infinitely boundless world and was born the psychological novel of modern times which instead explored the "infinity of the human soul." ~Or is that another illusion? Nadia El Tayar English A1 Higher February 3rd, 2003 Mr. Heery Mr. Heery ...read more.