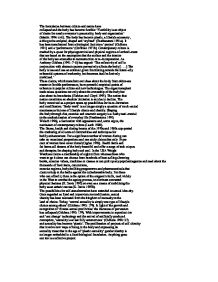 The boundaries between culture and nature have collapsed and the body has become flexible: 'Flexibility is an object of desire for nearly everyone's personality, body and organisation' (Martin 1994: xvii). The body has become plastic, a lifestyle accessory, a thing to be sculpted, shaped and 'stylized' (Featherstone 1991a). It has been transformed from a biological fact into a 'project' (Giddens 1991) and a 'performance' (Goffman 1971b). Contemporary culture is marked by a quest for physiognomical and physical regimes of embodi-ment that are based on the assumption that the surface and the interior of the body are amenable to reconstruction or re-incorporation. As Anthony Giddens (1991: 7-8) has argued: 'The reflexivity of self in conjunction with abstract systems pervasively affects the body [ . . . ] The body is less and less an extrinsic given functioning outside the intern-ally referential systems of modernity, but becomes itself reflexively mobilised.' These claims, which transform our ideas about the body from obdur-ate matter to flexible performance, have powerful empirical points of reference in popular culture and new technologies. The organ transplant trade raises questions not only about the ownership of the body but also about its boundaries (Elshtian and Cloyd 1995). The notion that nature constitutes an absolute limitation is an idea in decline. The body conceived as a project opens up possibilities for its re-formation and modification. 'Body work' is no longer simply a question of mech-anical maintenance but one of lifestyle choice and identity. Shaping the body through diet, exercise and cosmetic surgery is a fleshy testi-monial to the aestheticization of everyday life (Featherstone 1992; Welsch 1996), a fascination with appearance and, some argue, the narcissism of contemporary culture (Lasch 1980). The fitness, health and dieting booms of the 1970s and 1980s sup-ported the marketing of all sorts of commodities and techniques for bodily enhancement. For a significant number of women dieting can take on vocational proportions and one study claims that only 10 per cent of women have never dieted (Ogden 1992). ...read more.

The skin's surface is the very premise of visibility for the text and the bodies emerge in the works through their scription. Each is interpellated, indeed, made to matter, at their point and process of contact. Moreover, their materialisation is particular to the photographic process itself which draws/writes with light. These photographs are not of objects, but are the condition by which this text/body exchange can take place. As viewers, we are invited to engage actively with this materialisation, working to read the bodies, envisage the texts and make their interface meaningful. For example, the seventh photograph of the series casts a text by Elizabeth Grosz across the undulating surface of a woman's torso - we see/read each as a function of the other. I would argue that this powerful aesthetic performance of the text makes its meaning more fully material and sensually viable than any printed version could. xxv[xxv] As the words describe and inscribe the sensual surface of a woman's skin, literally and letterally, they materialise female desire and subjectivity as embodied, sentient knowledge.'xxvi[xxvi] The authority of the normative and clinical prescriptions of Reuben (1969) and Freud (1913) is undermined by the exuberance and presence of the vitality of the living, breathing body. Not all of the text is easily visible, and is distorted by the disruptive and excessive body upon which it is projected. Flesh overpowers word. The body answers back. 'The confrontation between real flesh and a text such as David Reuben's diatribe on the rapid decline of the older woman is a particularly challenging image as the body effectively swallows the words whole'.xxvii[xxvii] The poses were carefully chosen with reference to key well known art historical sources and to comment upon the texts projected upon them. For example, the word 'play' in the Irigaray (1985) quote from 'This sex which is not one' is caught in a mirror, raising issues of mimesis, visibility, reflection and the mirror's use by artists as a symbol of vanityxxviii[xxviii]. ...read more.

The remaining swelling will show symptoms of numbness; some areas may feel hard and tingly, and occasionally itchy. This last phase may persist for 6 to 12 months and more, following the procedure. Some surgeons stress that the procedures are not for everyone and warn their patients not to expect too much change in their lives as a result of the surgery. Many surgeons spend more time with patients discussing the pros and cons of the procedure than in the actual operation, and require a signature on an extensive and detailed consent form. They also stress that this is major surgery that ought to be carefully considered. Plastic surgery, like any other surgical procedure, involves serious risks-scaring, less-than-desirable results, infection, complications with anesthesia, and in extreme cases, blood clots or even death. The need for such caution seems obvious when one realizes that the vast majority of such operations are performed in a doctor's office out of sight of state and federal regulatory agencies. It should be noted that it's not legal in most states for any physician with a medical license to advertise as a plastic surgeon. Also, there are a lot of official-sounding certifications and organization that don't mean anything in terms of qualification. While cosmetic surgery may be an enormous boon to some patients, it has been a disaster for others, and many professionals fear that there is little reason to expect the two types of patients and surgeons to be carefully sorted out in today's overheated market of beauty. Extensive advertising in the trendier magazines, together with societies inability to accept the aging process, has created an aura that renders cosmetic surgery both respectable and inevitable, and many in the field expect it to be as common as orthodontic work in the near future. In some circles, it is even now an expected aspect of the successful lifestyle. Often, plastic surgery tends to be packaged as something that is both healthful and a requirement for success. Like it or not a cosmetic surgery revolution is upon us and unstoppable. ...read more.