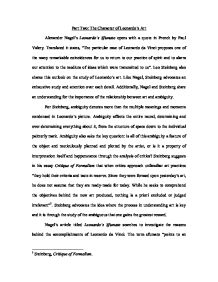 The Character of Leonardo

Part Two: The Character of Leonardo's Art Alexander Nagel's Leonardo's Sfumato opens with a quote in French by Paul Valery. Translated it states, "The particular case of Leonardo da Vinci proposes one of the many remarkable coincidences for us to return to our practice of spirit and to alarm our attention to the medium of ideas which were transmitted to us". Leo Steinberg also shares this outlook on the study of Leonardo's art. Like Nagel, Steinberg advocates an exhaustive study and attention over each detail. Additionally, Nagel and Steinberg share an understanding for the importance of the relationship between art and ambiguity. For Steinberg, ambiguity denotes more than the multiple meanings and moments condensed in Leonardo's picture. Ambiguity affects the entire mural, determining and over-determining everything about it, from the structure of space down to the individual painterly mark. Ambiguity also asks the key question: is all of this ambiguity a feature of the object and meticulously planned and plotted by the artist, or is it a property of interpretation itself and happenstance through the analysis of critics? Steinberg suggests in his essay Critique of Formalism that when critics approach unfamiliar art practices "they hold their criteria and taste in reserve. ...read more.

One of Leonardo's earliest paintings, the Madonna of the Carnation reveals the artist's painterly and compositional skill. The holy figures interact with one another in an emotionally evocative and harmonious manner. The Madonna, depicted in contemporary dress, shares a flower with her son. Both this and the small crucifix in the child's hand refers to the beginning and end of the life of Christ, the flower representing the baby's birth and the crucifix depicting the ultimate death of Christ on the cross. One of the most distinctive features from this painting is evidence of Leonardo's study of shadow and sfumato. The shadows are such that it appears that the painting's light source shines from above the viewer's shoulder, as if from heaven. Both mother and child are furnished with halos, a religious symbol of purity and holiness. The Virgin has a rounded, glowing face, typical of much of Leonardo's earlier work. Her expression exemplifies part of what set Leonardo's work apart from that of his contemporaries; she looks winsome and fresh and is without the inelegance of other artists' Madonnas from the time. Leonardo's Portrait of a Musician is an oil on wood painting composed in 1490 in Milan, Italy. ...read more.

The presence of the ermine offers several interpretations of significance. Ermines have an association with aristocracy and could very well represent a high social status. They are also used as a symbol of chastity and purity. The Lady with an Ermine is a captivating image of exquisite elegance and reveals the artistic genius of Leonardo's artwork. It is evident in Leonardo's artwork to witness the treatment of sfumato and application of ambiguous lines and shapes. His accomplished study of such forms of art launched Leonardo to be a highly esteemed philosopher and artist. Leonardo da Vinci's ingenuity and brilliance promotes his work to be some of the most critiqued and appreciated forms of art not only during his time but is maintained today. While his genius continues to be a source of much debate and study, what the world can uniformly agree with is that Leonardo's work will never fully be understood and appreciated. Perhaps that is the predominant reason why Leonardo's artistry continues to amaze both critics and students alike. 1 Steinberg, Critique of Formalism. 2 Nagel, Leonardo's Sfumato, part 1. 3 Nagel, Leonardo's Sfumato, part 1. 4 Windsor 1970, The Drawings of Leonardo da Vinci in the Collection of Her Majesty the Queen at Windsor Castle 5 Gombrich, "Blurred Images," p. 175. 6 Richter 492 ca.1492. 5 ...read more.