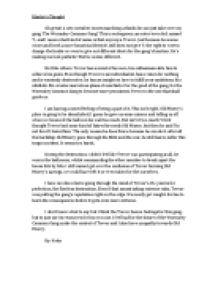 The Destructors by Graham Greene. Diary entry for Blackie

﻿Blackie?s Thought Oh great! A new member comes marching a thinks he can just take over my gang, The Wormsley Common Gang? This is outrageous, an outer town kid, named T., and I mean what kind of name is that anyways, Trevor. Just because he seems wiser and lived a more luxurious lifestyle, still does not give T. the right to vote to change the leader or even to give out different idea?s for the gang?s function. He?s making me look pathetic! ...read more.

I am having a mixed feeling of being a part of it. This isn't right. Old Misery?s place is going to be demolished, I guess he gave us some misery and telling us off when we bounced the balls on his wall too much. But isn?t it too much? I first thought Trevor had some kind of hatred towards Old Misery, but then he said ?Its not fun if I hated him.? The only reason he does this is because he can do it, after all the hardship Old Misery gone through the Blitz and the war, he still has to suffer this tragic incident. ...read more.

I have no idea what is going through the mind of Trevor?s. He yearns for perfection, the flawless destruction. Even if that meant taking extreme risks, Trevor was putting the gang?s reputation right on the edge. We nearly got caught. He has to learn the consequences before it gets even more extreme. I don't know what to say but I think the Trevor has no feelings for this gang, but to just use its resources for his own use. I feel bad for the future of the Wormsley Common Gang under the control of Trevor and I also have sympathy towards Old Misery. By: Keita ...read more.