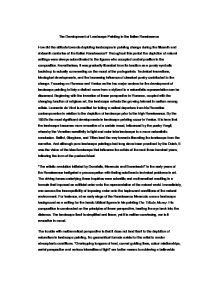 The Development of Landscape Painting in the Italian Renaissance.

The Development of Landscape Painting in the Italian Renaissance How did the attitude towards depicting landscapes in painting change during the fifteenth and sixteenth centuries of the Italian Renaissance? Throughout this period the depiction of natural settings were always subordinated to the figures who occupied central position in the composition. Nevertheless, it was gradually liberated from its function as a purely symbolic backdrop to actually commenting on the mood of the protagonists. Technical innovations, ideological developments, and the increasing influence of classical poetry contributed to the change. Focusing on Florence and Venice as the two major centers for the development of landscape painting in Italy a distinct move from a stylized to a naturalistic representation can be discerned. Beginning with the invention of linear perspective in Florence, coupled with the changing function of religious art, the landscape reflects the growing interest in realism among artists. Leonardo da Vinci is credited for taking a radical departure from his Florentine contemporaries in relation to the depiction of landscape prior to the high Renaissance. By the 1500's the most significant developments in landscape painting occur in Venice. It is here that the landscape becomes more evocative of a certain mood, influenced by the poetry Vergil, whereby the Venetian sensitivity to light and color take landscape to a more naturalistic conclusion. Bellini, Giorgione, and Titian lead the way towards liberating the landscape from the narrative. And although pure landscape paintings had long since been practiced by the Dutch, it was the vision of the ideal landscape that influence the artists of the next three hundred years, following the form of the pastoral ideal. "The artistic revolution initiated by Donatello, Masaccio and Bruneleschi" in the early years of the Renaissance instigated a preoccupation with finding solutions to technical problems in art. The driving forces underlying these inquiries were scientific and mathematical resulting in a formula that imposed an artificial order onto the representation of the natural world. ...read more.

He associated it with being a place whose darkness was threatening, yet is aware of the possibility that it may contain something marvelous.15 This dialogue between man and nature is well expressed in the cavern behind the Virgin, if indeed it is a cavern, because it is so ambiguous while at the same time, inviting. The light radiating from the opening beckons the viewer to take a closer look. The possibility also exists that his landscapes were fabrications of imagination, based on his own advice that "landscapes might be conjured up by contemplating stains on the wall".16 Regardless, of what inspired his landscape, the fact remains that he foresaw the possibility that the natural environment could compliment the figures in the foreground. Leonardo's landscapes, with an emphasis on the poetic, differs radically from the passive landscapes of his Florentine contemporaries, foreshadowing the course Venetian painting was to take at the turn of the century. The idea that art should appeal to the intellect rather than to the senses was less stringent at the onset of the high Renaissance in Venice. Landscape had it's biggest flourishing in this region and it was here, not Antwerp, that the term landscape (paese) was first applied to paintings.17 In 1521 Marc Antonio Michiel used the term landscape in his notes while inventorying the collection of Cardinal Grimani by stating that there were many paintings of the sort.18 Compared to other art inventories at the time, it is the first to group paintings to be categorized under the aegis of landscape, though they were probably not pure landscapes. That there was a market for landscape is also crucial to understanding it's development. The Italians during the fifteenth and sixteenth centuries had a fondness for Flemish art, astutely buying tapestries and paintings that depicted the Northern countryside.19 Furthermore, with the adoption of oil painting from the Netherlandish tradition, Venetian painters were able to paint landscapes that were "bathed in a new luminosity, transfiguring material forms of nature, and investing them ...read more.

Titian still brings the figures and the settings together, but it transcends the quiet, contemplative bond depicted by Bellini and Giorgione. Having examined the growing attention bestowed upon the subject of landscape, one wonders why it never developed into an independent art form during the Italian Renaissance. Certainly, the artists mentioned possessed the skill to be landscape artists, but there is no reason why the idea should have ever crossed their minds. Landscape was not practiced as an art form, The conventional subjects for painting were Christian themes, portraiture, and mythology. The Italian Renaissance was an age of enlightenment and discovery guided by the idea that man was the measure of all things. Nature posed a threat to the achievements of mankind and had to be tempered. This notion is given visual expression throughout the Renaissance by subordinating the environment to figural representations. The Italians did not attach any significance to the landscape except in it's ability to provide a pleasant view. It was regarded as superficial, revered for "the merely sensible allure of colors as opposed to the intellectual appeal of measure".28 Unlike the Flemish artists who produced art for a market based economy, Italian painters of the Renaissance relied on upper class patrons unwilling to spend large amounts of money on a genre held in such low esteem. When the artist did turn to pure landscape, it was either in the form of a drawing to be used as a study for a background or in the form of prints. Because the print was intended for larger circulation, it did not generate as much money as an original painting. Prints, therefore, permitted a wider range of subject matter, not serious enough for the painter to pursue. Apart from finding pure landscapes represented in these minor art forms, only a handful of artists in the Renaissance made conscious efforts towards cultivating a sense of mood in nature. Yet, this attitude, dedicated to landscape painting, emerged from the minds of a few independent spirits,29 and did not become a trend recognizable as a movement among artists of the Renaissance. ...read more.