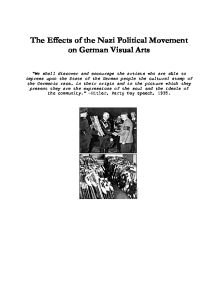 The Effects of the Nazi Political Movement on German Visual Arts

The Effects of the Nazi Political Movement on German Visual Arts "We shall discover and encourage the artists who are able to impress upon the State of the German people the cultural stamp of the Germanic race... in their origin and in the picture which they present they are the expressions of the soul and the ideals of the community." -Hitler, Party Day speech, 1935. Abstract: In European history, one often hears of the tragedies and violations against humanity caused by the Nazi Party both before and during the Second World War. The Nazi political movement was without a doubt, one of the most dramatic developments of the 20th century. Any exposure of ideas that were not promoted by the Party was denied. Visual arts naturally fell under this category of self-expression, as one of the most powerful types of artistic expression in society. In this essay, questions will be raised as to what effect this drastic political movement had on the German art at the time. Essentially, art was one of the most successful ways of increasing support for Hitler. Artistic expression simply became part of the Nationalist social political tactics. The art of the Third Reich helped to shape the German people's attitudes by having both discrete and indiscrete political messages, with stereotyped, idealized images. ...read more.

Even though the style of this painting is not particularly political, the themes of health, collective action, athletic strength, and competition are clearly put forward to spread the views of Nazi German. This painting4, by Arthur Kampf, is of 1933 Nazi seizure of power on 30th January. It shows the procession of a huge torch being lit. This piece serves as a memory of a historical event. It displays a dominance of law and order, soldiers are standing armed, in single file, and the public is saluting them in praise and acceptance. The light of the big torch can be seen as the main focus point as it is placed in the center of the painting. Perhaps it represents a brighter future as light often symbolizes optimism. Since it was painted in 1938, and the procession was held in Berlin in 1933, it must be glorifying the beginning of a new Germany in contrast to the Great Depression of the late 1920's. Before understanding the effects of the political influence on German art, it is important to have some knowledge of the movements and direction of the existing art before Hitler's time. German art was flourishing like never before during the Weimar Republic years. Some background information on 'pre-dictatorship' German art is therefore necessary in order to place the art movement in context. ...read more.

However, the religious parallels are quite small-minded and superficial. The idea of supporting Hitler is straightforward and very one-sided, like all heroic art pieces. . The Nazis viewed this as one of their best posters. It too is by Mj�lnir. The caption translates: "National Socialism: The Organized Will of the Nation." Goebbels claimed that Mj�lnir perfected the art of drawing the Nazi Storm Trooper. This poster is from the September 1930 Reichstag election, in which the Nazis made their electoral breakthrough. the caption: "The people rise! They vote List 9". Courtesy of Dr. Robert D. Brooks From the July 1932 Reichstag election. The text translates as:"We women vote for List2:National Socialists." This interesting poster appeared in 1932. The usual approach with posters is to use color to make them stand out. This one stands out because of Hitler's disembodied face floating on a black background. This is another November 1932 poster: "Hitler Builds." Courtesy of Dr. Robert D. Brooks. Conclusion: One perspective is that all 'Nazi' art can be looked upon as simple expressions of political motivation, rather than the work of skillful painters. However the aesthetic effort put into any piece of art should be appreciated and not be disregarded purely because of the political opinions it represents. The concept of art is hard to define, for example, sixty years ago; statues of Hitler were considered art in Berlin. Now, any public display of a Nazi symbol is illegal. ...read more.