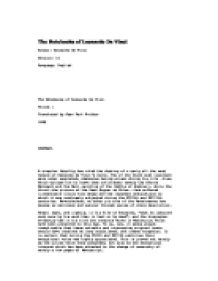 The Notebooks of Leonardo Da Vinci

The Notebooks of Leonardo Da Vinci Author: Leonardo Da Vinci Edition: 10 Language: English The Notebooks of Leonardo Da Vinci Volume 1 Translated by Jean Paul Richter 1888 PREFACE. A singular fatality has ruled the destiny of nearly all the most famous of Leonardo da Vinci's works. Two of the three most important were never completed, obstacles having arisen during his life-time, which obliged him to leave them unfinished; namely the Sforza Monument and the Wall-painting of the Battle of Anghiari, while the third--the picture of the Last Supper at Milan--has suffered irremediable injury from decay and the repeated restorations to which it was recklessly subjected during the XVIIth and XVIIIth centuries. Nevertheless, no other picture of the Renaissance has become so wellknown and popular through copies of every description. Vasari says, and rightly, in his Life of Leonardo, "that he laboured much more by his word than in fact or by deed", and the biographer evidently had in his mind the numerous works in Manuscript which have been preserved to this day. To us, now, it seems almost inexplicable that these valuable and interesting original texts should have remained so long unpublished, and indeed forgotten. It is certain that during the XVIth and XVIIth centuries their exceptional value was highly appreciated. This is proved not merely by the prices which they commanded, but also by the exceptional interest which has been attached to the change of ownership of merely a few pages of Manuscript. That, notwithstanding this eagerness to possess the Manuscripts, their contents remained a mystery, can only be accounted for by the many and great difficulties attending the task of deciphering them. The handwriting is so peculiar that it requires considerable practice to read even a few detached phrases, much more to solve with any certainty the numerous difficulties of alternative readings, and to master the sense as a connected whole. ...read more.

622. To make reddish black for flesh tints take red rock crystals from Rocca Nova or garnets and mix them a little; again armenian bole is good in part. 623. The shadow will be burnt ,terra-verte'. 624. THE PROPORTIONS OF COLOURS. If one ounce of black mixed with one ounce of white gives a certain shade of darkness, what shade of darkness will be produced by 2 ounces of black to 1 ounce of white? 625. Remix black, greenish yellow and at the end blue. 626. Verdigris with aloes, or gall or turmeric makes a fine green and so it does with saffron or burnt orpiment; but I doubt whether in a short time they will not turn black. Ultramarine blue and glass yellow mixed together make a beautiful green for fresco, that is wall-painting. Lac and verdigris make a good shadow for blue in oil painting. 627. Grind verdigris many times coloured with lemon juice and keep it away from yellow (?). Of preparing the panel. 628. TO PREPARE A PANEL FOR PAINTING ON. The panel should be cypress or pear or service-tree or walnut. You must coat it over with mastic and turpentine twice distilled and white or, if you like, lime, and put it in a frame so that it may expand and shrink according to its moisture and dryness. Then give it [a coat] of aqua vitae in which you have dissolved arsenic or [corrosive] sublimate, 2 or 3 times. Then apply boiled linseed oil in such a way as that it may penetrate every part, and before it is cold rub it well with a cloth to dry it. Over this apply liquid varnish and white with a stick, then wash it with urine when it is dry, and dry it again. Then pounce and outline your drawing finely and over it lay a priming of 30 parts of verdigris with one of verdigris with two of yellow. ...read more.

From the opposite side towards the South rises the great river Indus which sends its waters for 600 miles Southwards and receives as tributaries in this course the rivers Xaradrus, Hyphasis, Vadris, Vandabal Bislaspus to the East, Suastes and Coe to the West, uniting with these rivers, and with their waters it flows 800 miles to the West; then, turning back by the Arbiti mountains makes an elbow and turns Southwards, where after a course of about 100 miles it finds the Indian Sea, in which it pours itself by seven branches. On the side of the same mountains rises the great Ganges, which river flows Southwards for 500 miles and to the Southwest a thousand ... and Sarabas, Diarnuna, Soas and Scilo, Condranunda are its tributaries. It flows into the Indian sea by many mouths. On the natives of hot countries. 1112. Men born in hot countries love the night because it refreshes them and have a horror of light because it burns them; and therefore they are of the colour of night, that is black. And in cold countries it is just the contrary. [Footnote: The sketch here inserted is in MS. H3 55b.] _XVIII._ _Naval Warfare.--Mechanical Appliances.--Music._ _Such theoretical questions, as have been laid before the reader in Sections XVI and XVII, though they were the chief subjects of Leonardo's studies of the sea, did not exclusively claim his attention. A few passages have been collected at the beginning of this section, which prove that he had turned his mind to the practical problems of navigation, and more especially of naval warfare. What we know for certain of his life gives us no data, it is true, as to when or where these matters came under his consideration; but the fact remains certain both from these notes in his manuscripts, and from the well known letter to Ludovico il Moro (No._ 1340_), in which he expressly states that he is as capable as any man, in this very department._ _The numerous notes as to the laws and rationale of the flight of birds, are scattered through several note-books. ...read more.