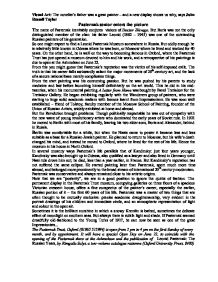 The novelist's father was a great painter - and a new display shows us why, says John Russell Taylor.

Visual Art: The novelist's father was a great painter - and a new display shows us why, says John Russell Taylor Pasternak senior enters the picture The name of Pasternak inevitably conjures visions of Doctor Zhivago. But Boris was not the only distinguished member of the clan: his father Leonid (1862 - 1945) was one of the outstanding Russian painters of his generation. So one might expect to find a Leonid Pasternak Museum somewhere in Russia. But oddly enough he is relatively little known in Odessa where he was born, or Moscow where he lived and worked for 40 years. On the other hand, he is well on the way to becoming famous in Oxford, where the Pasternak Trust has just opened a museum devoted to him and his work, and a retrospective of his paintings is due to open at the Ashmolean on June 22. ...read more.

But the Revolution brought problems. Though politically respectable he was out of sympathy with the new wave of young revolutionary artists who dominated the early years of Soviet rule. In 1921 he moved to Berlin with most of his family, leaving his two elder sons, Boris and Alexander, behind in Russia. Berlin was comfortable for a while, but when the Nazis came to power it became less and less suitable as a base for a Russian-Jewish painter. He planned to return to Moscow, but his wife's death changed his mind, and instead he moved to Oxford, where he lived for the rest of his life. Hence the museum in his house in North Oxford. In several uncanny ways Pasternak's life parallels that of Kandinsky: just four years younger, Kandinsky was also brought up in Odessa, also qualified as a lawyer and also lived in Germany until Nazi rule drove him out; he died, less than a year earlier, in France. ...read more.

Pasternak was a master of two things that are often thought to be mutually exclusive: precise academic draughtsmanship, very evident in the portrait drawings of his children and immediate circle, and an atmospheric representation of light and colour in the open air. Sometimes it is the brilliant sunshine in which a snowy Kremlin is bathed, sometimes the delicate effect of moonlight on southern seas. But always there is subtle light and shade. If Pasternak seemed dreadfully old-fashioned to the Young Turks of 1917, he can now be seen as one of the great Impressionists... The Pasternak Trust, Oxford (01865 515994) is open from 2 pm to 4 pm on the first Sunday of every month, and by appointment. It will have a special Open Day on June 22, to coincide with the opening of the Pasternak show at the Ashmolean and the publication of Leonid Pasternak: The Russian Years, by Rimgaila Salys, a two-volume catalogue raisonne (Oxford University Press, $400) ...read more.