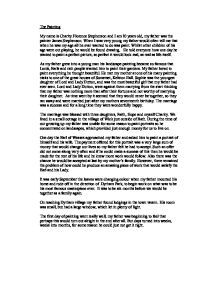 The Painting of Charity Florence Stephenson.

The Painting My name is Charity Florence Stephenson and I am 10 years old, my father was the painter James Stephenson. When I was very young my father would often tell me that when he was my age all he ever wanted to do was paint. Whilst other children of his age were out playing, he would be found drawing. He told everyone how one day he wanted to paint a perfect picture, so perfect it would look real, as real as life itself. As my father grew into a young man his landscape painting became so famous that Lords, Earls and rich people wanted him to paint their gardens. My father loved to paint everything he thought beautiful. He met my mother at one of his many painting visits to one of the great houses of Somerset, Kelston Hall. Sophie was the youngest daughter of Lord and Lady Dutton, and was the most beautiful girl that my father had ever seen. Lord and Lady Dutton, were against them marrying from the start thinking that my father was nothing more than after their fortune and not worthy of marrying their daughter. As time went by it seemed that they would never be together, so they ran away and were married just after my mothers seventeenth birthday. The marriage was a success and for a long time they were wonderfully happy. ...read more.

He told him the whole story of how he was trying to complete a painting of the Earl of Wessex, and that he could not come home until he had done so. He told of how he felt that he had let down his family and that he did not know what to do next. Davy the young gypsy lad felt sorry for my father, he told him of this old gypsy woman who had untold powers and who may just be able to help. They agreed to meet the next day at the crossroads just outside of the town. Davy took my father to the gypsy camp and told him to go into one of the old caravans that had been parked some way from the others. Inside the dark caravan was a very old gypsy woman dressed in black. He was terrified to look her in the face but my father explained the problem he had, the old gypsy stared deep into his eyes, mumbled a few words he did not understand then grabbed his hands and stroked his fingers. He did not remember leaving the caravan but found himself in the road back to the village. The wind was blowing wildly and seemed to be saying something to him, it sounded like it was saying beware the gypsy curse! ...read more.

I recently heard the guide talking about the man who had painted the Earl and his wife, he said the painter's hands had been cursed by a gypsy who had wanted revenge on the Earl. The gypsy woman's curse was that once the painting had been completed and hung on the wall the soul and life of the Earl would become trapped in the painting for all eternity. There he would be starring out for the rest of eternity not able to move or speak or become free of his prison. The guide also said that the painter had only ever completed one more painting and this was of his beloved daughter Charity. It was thought that the daughter ran away shortly after the painting had been completed and James Stephenson died of a broken heart. But the guide said that if James Stephenson had listened to the old gypsy woman he would have heard that after painting the Earl he should never paint another portrait again in his life, and by doing so he committed the daughter he loved so much to a life of imprisonment. I know now what happened to me was a terrible mistake that should never of happened, I am like the Earl and his wife trapped for all eternity. So when you visit Grand houses of yesterday please remember this story, look again at the person before you and ask yourself is this just a painting or some lost soul like me...... ...read more.