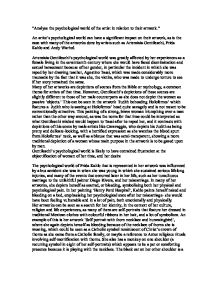 The Psychological World of the Artist

“Analyse the psychological world of the artist in relation to their artwork.”

An artist’s psychological world can have a significant impact on their artwork, as is the case with many of the artworks done by artists such as Artemisia Gentileschi, Frida Kahlo and Andy Warhol.

Artemisia Gentileschi’s psychological world was greatly affected by her experiences as a female living in the seventeenth century where she would have faced discrimination and sexual harassment because of her gender, in particular the incident in which she was raped by her drawing teacher, Agostino Tassi, which was made considerably more traumatic by the fact that it was she, the victim, who was made to undergo torture to see if her story remained the same.

Many of her artworks are depictions of scenes from the Bible or mythology, a common theme for artists of that time. However, Gentileschi’s depictions of these scenes are slightly different to those of her male counterparts as she does not depict the women as passive ‘objects.’ This can be seen in the artwork ‘Judith beheading Holofernes’ which features a  Judith who is sawing at Holofernes’ head quite savagely and is not meant to be conventionally attractive. This painting of a strong, brave woman triumphing over a man rather than the other way around, as was the norm for that time could be interpreted as what Gentileschi wished would happen to Tassi after he raped her, and it contrasts with depictions of this scene by male artists like Caravaggio, who depicts his Judith as being pretty and delicate-looking, with a horrified expression as she watches the blood spurt from Holofernes’ neck, as well as a blouse that was semi-transparent, showing a more traditional depiction of a woman whose main purpose in the artwork is to be gazed upon by men.

Gentileschi’s psychological world is likely to have contained frustration at the objectification of women of her time, and her desire

The psychological world of Frida Kahlo that is represented in her artwork was influenced by a bus accident she was in when she was young in which she sustained serious lifelong injuries, and many of the events that occurred later in her life, such as her tumultuous marriage to the unfaithful painter Diego Rivera, and her miscarriage. In many of her artworks, she depicts herself as scarred, or bleeding, symbolising both her physical and psychological pain. In her painting ‘Henry Ford Hospital’, Kahlo paints herself naked and bleeding on a bed, emphasising her psychological state after her miscarriage- she would have been feeling vulnerable and in a lot of pain, both emotionally and physically.

Her artworks can be seen as a search for her identity, in the context of her culture, religion and life experiences, as many of them are self-portraits that feature her dressed in traditional Mexican clothes with colourful ribbons in her hair, and a lot of symbolism. An example of this is her artwork ‘Self portrait with thorn necklace and hummingbird’, where she again depicts herself as bleeding because of the necklace of thorns she is wearing, which could be seen as a Catholic symbol reminiscent of Christ’s crown of thorns as she came from a Catholic family, or maybe a reference to Aztec religious rituals involving self-mortification with thorns. She also has a monkey on one shoulder (a recurring symbol in eight of her self-portraits) which appears to be a pet or comforting presence because it is playing with the necklace. The black cat on her other shoulder is a more ominous, threatening presence as it looks as though it is about to pounce and its eyes are a cold, uninviting grey. The juxtaposition of colour, and playful images with symbols of doom or death, and a bleeding body is a common theme in many of Kahlo’s works and has been interpreted as Surrealism; however Kahlo denied this, saying “I paint my own reality.”

Andy Warhol’s childhood played an important part in the formation of his psychological world and personality that led to him becoming a central figure in the Pop Art movement that took place in America in the 1960s. As a child, Warhol was diagnosed with St Vitus’ dance, which caused him to spend a lot of time bed-ridden with nothing to do but draw, listen to the radio and collect pictures of celebrities from magazines to stick around his bed. This constant exposure to popular culture would have been extremely influential in the development of Warhol’s later work, in which he depicted easily recognisable images in American culture, including celebrities like Marilyn Monroe and Elvis Presley, and everyday items like Campbell’s soup. In his artwork ‘100 Campbell’s Soup Cans’, he explores the idea of mass production that was becoming such an important part of American culture, but says that he chose Campbell’s soup because that was what he had for lunch for most of his life.

Warhol’s psychological world which was influenced by his childhood was depicted quite literally in his artworks- images of celebrities and mass-produced products like Campbell’s soup played a larger-than-normal role in his childhood in particular. Warhol clearly had a great deal and admiration and affection for these things, even going so far as to say “I want to be plastic.”

Though all of these artworks were done in styles that were gaining popularity in the time that the artist was working, it was the artist’s psychological world that ultimately motivated them to create most of their artworks.