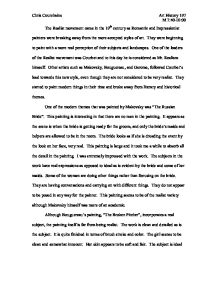 The Realist movement came in the 19th century as Romantic and Impressionist painters were breaking away from the more accepted styles of art. They were beginning to paint with a more real perception of their subjects and landscapes. One of the leaders of the Realist movement was Courbet and to this day he is considered as Mr. Realism himself. Other artists such as Makovsky, Bouguereau, and Gerome, followed Courbet's lead towards this new style, even though they are not considered to be very realist. They started to paint modern things in their time and broke away from literary and historical themes. One of the modern themes that was painted by Makovsky was "The Russian Bride". This painting is interesting in that there are no men in the painting. ...read more.

Although Bouguereau's painting, "The Broken Pitcher", incorporates a real subject, the painting itself is far from being realist. The work is clean and detailed as is the subject. It is quite finished in terms of brush stroke and color. The girl seems to be clean and somewhat innocent. Her skin appears to be soft and fair. The subject is ideal rather than real. Peasants in this time era most likely did not look like this girl but the overtone of realism sets in when you notice the broken pitcher. All at once, her innocence seems to be lost and she does not appear so clean. Gerome's "The Bath", was one of my favorites as well. I really liked the use of the colors. ...read more.

The brush strokes are rough and uncalculated. They do not seem to have rhyme or reason, like a true wave. There are no feelings or emotion in the work, it is what it is. Monet's "Waves Breaking" is similar to Courbet's. Like Courbet, Monet did not make the subject ideal, he painted what he saw. The brush strokes are also similar because they are rough and not precise. Both paintings are more clear and beautiful when they are viewed from a distance, but as you get closer to each of the works, it is easy to lose sight of what the painting is. However, as you get closer to the works, it is more evident that they are of the realist variety by the brush stroke and color. Chris Courchaine Art History 197 M 7:40-10:00 ...read more.