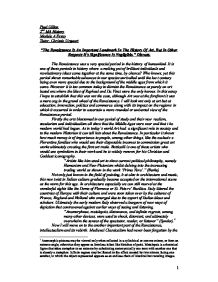 &quot;The Renaissance Is An Important Landmark In The History Of Art, But In Other Respects It's Significance Is Negligible.&quot; Discuss.

Paul Gillen 2nd MA History Module A Essay Tutor: Chrissie Urquart "The Renaissance Is An Important Landmark In The History Of Art, But In Other Respects It's Significance Is Negligible." Discuss. The Renaissance was a very special period in the history of humankind. It is one of those periods in history where a melting pot of brilliant individuals and revolutionary ideas came together at the same time, by chance? Who knows, yet this period shows remarkable advances in our species unrivalled until the last century being even more special due to the background of the middle ages from which it came. However it is too common today to dismiss the Renaissance as purely an art based era where the likes of Raphael and Da Vinci were the only heroes. In this essay I hope to establish that this was not the case, although Art was at the forefront it was a mere cog in the grand wheel of the Renaissance. I will look not only at art but at education, innovation, politics and commerce along with its impact on the regions in which it occurred in order to ascertain a more rounded or universal view of the Renaissance period. ...read more.

The Universal Man was a bi-product of the search of Humanism. He who was a Universal man would be of all the sciences. The gentry folk of the period would strive to have wisdom and become virtuous so they would be a rounded individual and in turn would become famous. As before fame was usually graced upon the deceased, the rich individuals and families wanted to show everyone that they were important; often going to the extremes of producing artworks and medals of themselves to be circulated. "Having heard the whispers of imagination and desire from those who praised the artists and scholars they searched for their own following" (Hale) Under most circumstances Leonardo Da Vinci was seen as the perfect example of the universal man. He encroached in all aspects of the intellectual being. Famous for the Mona Lisa and that smile people yet ignore the way he deals with the geology of the background in that and in most of his early works, the most famous being 'Virgin of the Rocks'. His depth and vision were amazing as he delved into mathematics such as the platonic solids, exploring the underlying forms of reason. ...read more.

Adam Ferguson noted that the progress of fine arts had generally made a huge part in the history of prosperous nations while John Millar pointed out that Florence led the way in manufacturing as well as in the arts. In addition Adam Smith planned to write a book about the relationship between the arts and sciences and society in general in which it was very likely - as in his wealth of nations - the city states of Italy would have played a prominent part. At as first glance the contemporary Historian would immediately dismiss the claim that in other respects, outside of art, the Renaissance contribution was negligible. Although it is obvious that the artistry of this period is exclusive and at the forefront of most people's mind, to neglect the various cultural, social and economic aspects of it is a grave mistake in the historical context. The Renaissance was the catalyst for the Reformation, which is ultimately important in revising the impact of religion and its consequences in the last few centuries. Socially it could be said that the renaissance exported the ways and means of education and provided the world with the forbearing university system. Economically, the expansion of commerce brought the beginning of modern day trading and is noted for being responsible for such endeavours as Marco Polo' expeditions and the discovery of the Americas. ...read more.