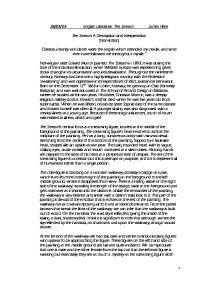 The Scream: A Description and Interpretation.

28/03/03 English Literature: The Scream James Hare The Scream: A Description and Interpretation (Non-fiction) "Disease, insanity and death were the angels which attended my cradle, and since then have followed me throughout my life." Norwegian artist Edvard Munch painted The Scream in 1893. It was during the time of the Industrial Revolution, when Western Europe was experiencing great social change in its urbanisation and industrialisation. Throughout the nineteenth century, Norway had become a highly religious country with the Protestant 'awakening' and was oppressive in its expectations of strict, puritanical behaviour. Born on the December 12th 1863 in L�ten, Norway, he grew up in Oslo (formerly Kristiania) and was well educated in The School of Art and Design in Kristiania, where he studied art for two years. His father, Christian Munch, was a deeply religious military doctor. Edvard's mother died when he was five years old from tuberculosis. When he was fifteen, his eldest sister Sophie died of the same disease and Edvard himself was often ill. A younger sibling was also diagnosed with a mental illness at a young age. Because of these tragic influences, much of his art was related to illness, death and grief. ...read more.

Instead of beauty, the joy of communion in human relationships and the peacefulness of pastoral and nature-scenes, positive aspects of life painted by many painters, including the French Impressionists before him, Munch is revealing negative aspects of life as he saw and experienced it. My understanding of why the main figure is screaming is because he feels trapped and alienated by his society and its prohibitive laws. The figure is caught on the bridge and cannot reach the freedom of the wavy water, moving as it will, because the handrail of the walkway blocks him from the freedom of the sea. He can't move forward or he will fall off the page. He can't travel further along the walkway because he is hemmed in by the two ominous looking figures behind him. The figures' human nature is being obstructed; society is trying to model him into someone they want him to be, rather than who he is or wants to be. In the figure's cry of pain at the suffering of humanity and the restrictions and constraints of society, the painting could be asking whether life, if it entails such suffering, is worth living. It seems to be saying, if your spirit is dead, you might as well also be dead in body. ...read more.

Technology has improved travel and communication but there is still conflict, strife and war, and instability in relationships. In conclusion, Munch had extremely powerful paintings. The way hat he expressed himself through his art is what gave him the best qualities as an artist. The pain that he had to deal with was terrible, but he put it to good use. Edvard Munch died on January 23rd, 1944 in Ekely, near Oslo. He was eighty years old and through his lifetime he had created 1,008 paintings, 15,391 prints, 4,443 drawings and watercolours, and six sculptures. In 1963, a museum was opened to showcase all of his great work. The museum, situated in Olso is called The Munch-Museet. "Choose life. Choose a job. Choose a career. Choose a family. Choose a fucking big television. Choose washing machines, cars, compact disc players and electrical tin openers...choose DIY and wondering who the fuck you are on a Sunday morning. Choose sitting on that couch watching mind- numbing, spirit-crushing game shows, stuffing fucking junk food into your mouth. Choose rotting away at the end of it all, pissing your last in a miserable home, nothing more than an embarrassment to the selfish, fucked-up brats you spawned to replace yourself. Choose a future. Choose life...But why would I want to do a thing like that?" -- Renton, Trainspotting 1 ...read more.