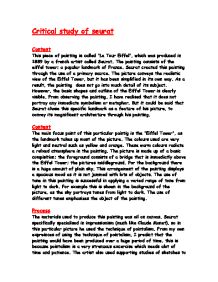 This piece of painting is called 'La Tour Eiffel', which was produced in 1889 by a french artist called Seurat.

Critical study of seurat Content This piece of painting is called 'La Tour Eiffel', which was produced in 1889 by a french artist called Seurat. The painting consists of the eiffel tower; a popular landmark of France. Seurat created this painting through the use of a primary source. The picture conveys the realistic view of the Eiffel Tower, but it has been simplified in its own way. As a result, the painting does not go into much detail of its subject. However, the basic shapes and outline of the Eiffel Tower is clearly visible. From observing the painting, I have realised that it does not portray any immediate symbolism or metaphor. But it could be said that Seurat chose this specific landmark as a feature of his picture, to convey its magnificent architecture through his painting. ...read more.

For example this is shown in the background of the picture, as the sky portrays tones from light to dark. The use of different tones emphasizes the object of the painting. Process The materials used to produce this painting was oil on canvas. Seurat specifically specialised in impressionism (much like Claude Monet), so in this particular picture he used the technique of pointalism. From my own expreinces of using the technique of pointalism, I predict that the painting would have been produced over a huge period of time. this is because pointalism is a very strenuous excercise which needs alot of time and patience. The artist also used supporting studies of sketches to produce this painting. ...read more.

Personal Response As a viewer the effect of this particular painting of Seurat's is that it implys the 'Eiffel Tower' as a centre piece of France. This is because the 'Eiffel Tower' in his painting is very bold and has a certain supriority over the rest of the painting. It stands overlooking the foreground which could be said to display its importance. The relationship between this picture and my own work is the picture portrays a very popular landmark of the city of Paris. This is relevent as the idea of using famous city landmarks can convey the project 'My City'. The work that I could adapt from this painting for my own use could be the technique of pointalism. I could also use a similar idea by painting a famous landmark from my own city in the same manner of Seurat. ...read more.