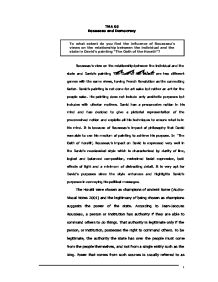 TMA 05 Rousseau and Democracy Rousseau's view on the relationship between the individual and the state and David's painting 'The Oath of the Horatii' are two different genres with the same views, having French Revolution as the connecting factor. David's painting is not done for art sake but rather an art for the people sake. His painting does not include only aesthetic purposes but includes with ulterior motives. David has a preconceive notion in his mind and has decided to give a pictorial representation of the preconceived notion and exploits all his techniques to ensure what is in his mind. It is because of Rousseau's impact of philosophy that David was able to use his medium of painting to achieve his purpose. In 'The Oath of Horatii', Rousseau's impact on David is expressed very well in the David's neoclassical style which is characterized by clarity of line, logical and balanced composition, restrained facial expression, bold effects of light and a minimum of distracting detail. It is very apt for David's purposes since the style enhances and highlights David's purposes in conveying his political messages. The Horatii were chosen as champions of ancient Rome (Audio-Visual Notes 2001) ...read more.

The Horatii might come to a conclusion of a general will to offer their lives on behalf of their country. But how do we determine what is general will? Rousseau believes that if we all think in a clear-headed and rational way, the answer should be the one each of us arrives at. Rousseau added that the best procedure to determine the general will is to take a vote that is free from corruption. Individuals whose answer differs from the majority must have not thought rationally, and hence can be forced to adopt the general will. The Horatii might have voted to come with a conclusion on whether to fight for their country and engage duels with their own family members who are related to the Curatii or to put a stand of not committing their lives and their family members at risk. If one of the Horatii's decision differs, the other brothers might have influenced or force him into adopting the general will. Rousseau once claimed, 'Man is born free, and everywhere he is in chains.' What he means by the phrase 'in chains' is actually 'living in society'. ...read more.

The postures of the sisters were painted as such that their heads are facing down with eyes closed with their backs slouching. These choices of colours, postures and gestures suggest that David wants to create the solemn ambience within the female figures and the contradiction of their particular will against the general will of the state. In Rousseau's view, particular will is concerned with an individual's advantage. The ladies may be convinced by their three brothers and their father to think that their particular will is the product of appetite while general will is the product of reason. Since a person acting on his appetite is slavish and bad, while a person acting on reason is noble and good, they should therefore obey the general will and allow their brothers to fight; even to the extent of having duels with their own family members. With the cross referencing between Rousseau's views and David's painting "The Oath of the Horatii" that has been presented, we can conclude that it is because of Rousseau's impact of philosophy that David was able to use his medium of painting to achieve his purpose and this is evident through the pictorial representation in conveying particular will and the general will of "The Oath of the Horatii". (1207 words) 1 ...read more.