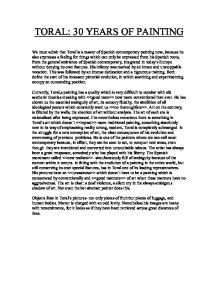 TORAL: 30 YEARS OF PAINTING We must admit that Toral is a master of Spanish contemporary painting now, because he also expresses a feeling for things which can only be expressed from his Spanish roots, from the general ambience of Spanish contemporary, integrated in today�s Europe without denying its own features. His infancy was marked by an innate and unstoppable vocation. This was followed by an intense dedication and a rigourous training. Both define the start of his incessant pictorial evolution, in which searching and experimenting occupy an outstanding position. ...read more.

Art on the contrary, is filtered by the walls, the emotion of art without analysis. The art of each era is rationalised after being expressed. I�m nevertheless conscious there is something in Toral�s art which doesn�t <<repeat>> more traditional painting, something absolutely new in its way of emphasizing reality strong, modern, Toral is completely submerged in the struggle for a new conception of art, the clear consequence of his evolution and overcoming of previous problems. ...read more.

His pictures have an <<uneasiness>> which doesn�t have to be a painting which is consecrated by conventionally and <<good manners>> of art when these manners have no aggresiveness. The art is clear: a deaf violence, a silent cry in the always ambigous shadow of art. Not even the bet abstract painter does this. Objects float in Toral�s pictures- not only pieces of fruit but pieces of luggage, and human bodies. Matter is charged with an odd levity. Nonetheless his images are heavy with remembrance, for it looks as if they have been retrieved across great distances of time. ...read more.