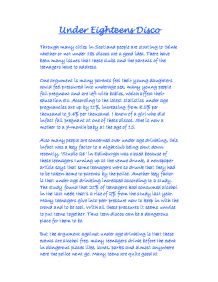 Under Eighteens Disco Through many cities in Scotland people are starting to think whether or not under 18s discos are a good idea. There have been many issues that these clubs and the parents of the teenagers have to address. One argument is many parents feel their young daughters could feel pressured into underage sex, many young people fall pregnant and are left with babies, which affect their education etc. According to the latest statistics under age pregnancies are up by 11%, increasing from 8.5% per thousand to 9.4% per thousand. I know of a girl who did infact fall pregnant at one of these discos. She is now a mother to a 7-month baby at the age of 15. ...read more.

But the argument against under age drinking is that these events are alcohol free, many teenagers drink before the event in dangerous places like, lanes, parks and almost anywhere were the police wont go. Many teens are quite good at disguising alcohol, they colour co-ordinate for example they put orange mad dog into perhaps a fanta bottle, If they are drinking alcohol which cant be disguised they will simply put into bottles that are translucent. Many other parents and teens say that under 18's discos are a good way for them to have fun with their friends after hard weeks school/ exams. Many teens between 14-18 say that school is very stressful with studying for prelims, standard grade and higher exams. They say socialising, dancing and just forgetting about school helps them relieve stress and boredom. ...read more.

In the eyes of teens this shows that they are beginning to be treated as a young adult, not a child. This builds confidence and self-esteem. They gain trust from parents and treat them with a little respect. I would say that these clubs are a good idea but are not suitable for this day in age as they are not completely safe. Alcohol is easy to get and drugs in the eyes of some teens are a must have. They promote adulthood, sex and drugs. I think that these clubs should only hold over 18's discos, as adults are a more mature and often are well educated on drugs, they are allowed to have sex and know the situation that they could put themselves in. In my opinion these discos are a bad idea and cast a negative influence over these teenagers. By Donald Thomas ...read more.