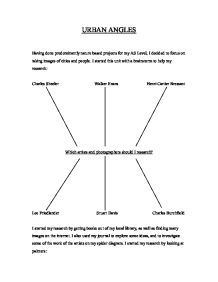 URBAN ANGLES Having done predominantly nature based projects for my AS Level, I decided to focus on taking images of cities and people. I started this unit with a brainstorm to help my research: Charles Sheeler Walker Evans Henri Cartier Bressant Which artists and photographers should I research? Lee Friedlander Stuart Davis Charles Burchfield I started my research by getting books out of my local library, as well as finding many images on the internet. I also used my journal to explore some ideas, and to investigate some of the work of the artists on my spider diagram. I started my research by looking at painters: This first painting is by Edward Hopper, titles Manhattan Bridge Loop, painted in 1928: 'Manhattan Bridge Loop' is a very horizontal painting. This is mainly due to the painting being horizontally divided into four sections. The first section is the sky, the second section is the buildings, the third section is a wall and the final, a path a couple of metres below the rest, along which a small man dressed in green, is walking. The man is the only form of life visible in the painting. He brings an element of movement to an otherwise static scene. His movement, and it is clear that he is moving due to his back leg being slightly lifted as though he were about to take a step, is in fact about to take him out of the painting for he is at the far left of it and is walking in that direction. This could signify that there is little hope left of life. If this seemingly unimportant man were to leave the painting, it would become entirely static, in the same way that life would. The man, due to his position in the painting, is blind to what the viewer can see. There is also a parallel between the man and the lamppost on the opposite side of the painting, as they are almost equidistant from the two edges of the painting. ...read more.

There is the wall, rendered yet heavier and darker by the large rectangular black shapes which fit evenly and symmetrically in it. These black rectangles dominate the photograph not only in the fact that they cover much of the photograph's surface, but also in their heaviness. This contrasts the considerably lighter-coloured road, maquill� with black humanesque shapes which are all walking in the same direction. These shapes are dominated and dwarfed by the edifices for they are far larger and bolder than themselves. As we know from the title that the photo was taken in Wall Street, U.S.A. and also the world's centre of economy, one can assume that the buildings are stock exchange markets or banks and can thus assume that the way the silhouetted humans are towered by the buildings of economy in such an extreme way that it represents how Americans are controlled by America's economy. Or to make a more general statement, that Americans are controlled by bureaucracy. The fact that they are all walking in the same direction puts this in evidence as they seem to have little control over their lives. Every morning save weekends and holidays these people can be found on the same road to the same offices and again coming home in the evening. Another statement one could make, also taking into account the way the humans are merely black shapes, is one similar to a statement one can make about the above Hopper painting: 'The City'. Each one of these black shapes' emotions is entirely irrelevant to the functioning of life and to all other people. In this case their task is to work in these buildings and that is what they will do, their feelings are of no relevance. The people are followed by their shadows - forming near perfect right angles - which are very long; yet longer than the people, indicating that (as one would imagine from people going to or leaving work) ...read more.

The busy composition sends the viewer all over the page, with the movement of the people animating the street scene. The white sign effectively breaks up the page, send the viewer diagonally across the page. The picture does not reflect the busyness of a bustling city, illustrating the benefits of having smaller populations. In my opinion the main reason this image is effective is because of the interesting affects of the reflection, as well as the movement and patterns of the street scene. The significance of the lettering 'payment voucher' ties in with the location of the image, illustrating the mentality of the Singaporean government, with the results also shown- a very clean and orderly city. While researching some of the photographers I noticed some similarities to that of my work, for example the use of reflections: The image above by Walker Evans has the very appropriate title "city lunch counter". It Evaluation I have found this project extremely beneficial as it has complimented my previous focus on nature related topics. I have enjoyed the more spontaneous and intuitive approach required of a photographer in a vibrant city, and was extremely fortunate to be able to take images in Singapore as well as London. Both have provided me with different but lively environments to take pictures, especially Singapore which had beautiful strong lighting and interesting reflections off some of the newly constructed buildings. In my opinion these were my most effective images, as I really liked experimenting with the distortion of reflections. Looking back at the project I would have liked to have taken pictures in different conditions, and possibly taken more images related to street photography as I really enjoyed that aspect of the project. However, overall I am very pleased with this project, and think that some of the solarisations were extremely successful. Researching artists and photographers has given me a lot of respect and appreciation for their work, as well as providing inspiration for my own images. In particular there are many links between some of my photographs and the reflections of Walker Evans (which I have previously discussed). ...read more.