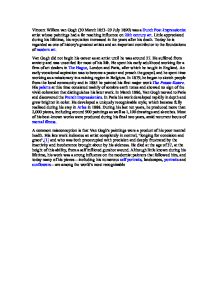 Vincent Willem van Gogh (30 March 1853-29 July 1890) was a Dutch Post-Impressionist artist whose paintings had a far reaching influence on 20th century art. Little appreciated during his lifetime, his reputation increased in the years after his death. Today he is regarded as one of history's greatest artists and an important contributor to the foundations of modern art. Van Gogh did not begin his career as an artist until he was around 27. ...read more.

In 1879, he began to sketch people from the local community and in 1885 he painted his first major work The Potato Eaters. His palette at this time consisted mainly of sombre earth tones and showed no sign of the vivid coloration that distinguishes his later work. In March 1886, Van Gogh moved to Paris and discovered the French Impressionists. In Paris his work developed rapidly in depth and grew brighter in color. ...read more.

A common misconception is that Van Gogh's paintings were a product of his poor mental health. His late work indicates an artist completely in control, "longing for concision and grace",[1] and who was both preoccupied with precision and deeply frustrated by the inactivity and incoherence brought about by his sickness. He died at the age of 37, at the height of this ability, from a self inflicted gunshot wound. Although little known during his lifetime, his work was a strong influence on the modernist painters that followed him, and today many of his pieces-including his numerous self portraits, landscapes, portraits and sunflowers-are among the world's most recognizable ...read more.