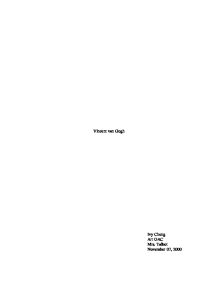 Vincent van Gogh Ivy Cheng Art OAC Mrs. Talbot November 07, 2000 Once, Vincent van Gogh said, "Everything that is really good and beautiful, of inward moral, spiritual and sublime beauty in human beings and in their works come from God" (2, Peter). Throughout his life, Vincent van Gogh felt trapped in a world even though he didn't know what it was. He tried very hard to escape this barrier by believing in God, helping others and putting his devotion to his paintings. Vincent Willem van Gogh was born on March 30, 1853 in Groot Zundert, in the Dutch province of Brabant, near the Belgian border. Vincent's father was Theodorus van Gogh, who was a preacher in the Dutch Reformed (Calvinist) Church. Vincent's mother was Anna Cornelia Carbentus, who was the daughter of a bookbinder from The Hague. They were both very faithful members of the Church and never refused to give help to those in need. These traits affected Vincent greatly and caused his strong belief in God. As a result, the two themes - the commandment to work for the good of others and the pleasure of expressing his artistic vision by means of pencil and brush, remained with Vincent until he died. ...read more.

There, he stayed for two years and produced over a hundred paintings, watercolours and drawings. On March 26th, 1885, Vincent's father died and the artist once again fell into a depression. During April and May of the same year, Vincent painted The Potato Eater. In the fall of the same year, he left his home to move to Antwerp in hope to learn more about the past artists. He came across Fernand Cormon's name and decided to go to Paris to study with him. In Paris, he met his brother Theo, who by then had own a small gallery with nearby restaurants filled with young Impressionists. During the year 1886, Vincent met Monet, Pissarro, Renoir, Degas, Toulouse-Lautrec, Seurat, Sisley and Signac. These young artists impressed Vincent with their radical theories and the bright colours they used. In the winter of 1886 to the year 1887, Vincent met Paul Gauguin and they became good friends immediately. In 1888, Vincent settled in Arles, in the south of France and continued his paintings. In October, Vincent invited Gauguin to join him at his Yellow House. However, the two friends have trouble living together. After a tensed argument, Gauguin left Vincent who later cut off one of his ears. ...read more.

Then, my eyes went to the wave - like curves in the center. The atmosphere made the overall painting cold and windy especially the light blue, snow covered mountain behind the town. "Self Portrait With Bandaged Ear" is perhaps the most well known Van Gogh painting. Painted near his death in January, 1889, it was thought to be the result of the fight between Vincent and his friend, Gauguin. Here, Vincent tried to paint himself after he cut his ear off. The red background seems to represent the rage and passion Vincent experienced during his argument. The pipe in his mouth is also significant. The pipe was thought to be Vincent's most cherished possessions and this painting verified it. His green jacket contrasts with the bright red background, making Vincent stand out in the painting. When I looked at the painting, I found myself staring into a pair of depressed eyes. He seems to be tired and in pain. The bandage told us that he was injured and he may be smoking to ease the pain. Through out his life, Vincent van Gogh experienced stages of depression, rejection and poverty. These tough periods of time helped improve Vincent's styles and techniques. Inspirations from his religion and morals produced many fine masterpieces such as "The Potato - Eaters" and "Starry Night". Although Vincent died at an early age, his excellent artwork will live forever. ...read more.