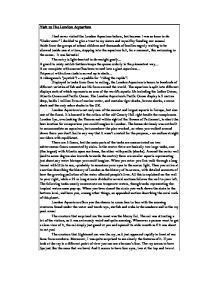 Visit to The London Aquarium I had never visited the London Aquarium before, but because I was so keen to do "Underwater" I decided to give a treat to my sisters and myself by flooding our senses! Aside from the groups of school children and thousands of families eagerly waiting to be allowed inside one at a time, stepping into the aquarium felt, for a moment, like swimming in the ocean. It was fantastic! The entry is light-hearted to downright goofy... A guard in misty ostrich feathers keeps the queue orderly in the pleasantest way... A car complete with sunroof has been turned into a giant aquarium... Potpourri with citrus rinds is served up in shells... A videogame's "joystick"? -- a paddle for "riding the rapids"! Displayed in tanks from floor to ceiling, the London Aquarium is home to hundreds of different varieties of fish and sea life from around the world. The aquarium is split into different displays each of which represents an area of the world's aquatic life including the Indian Ocean, Atlantic Ocean and Pacific Ocean. The London Aquarium's Pacific Ocean display is 5 metres deep, holds 1 million litres of marine water, and contains tiger sharks, brown sharks, a nurse shark and the only zebra sharks in the UK. ...read more.

They could recite Sergeant Pepper 150 times a week. * A shrimp's heart is in its head and garfish have green bones. * Every year the Aquarium has had enough people to fill the Commonwealth Games Stadium in Manchester 24 times. * The most common name for a goldfish is "Jaws". * The livestock consume 12 tons of food a year, that's the same weight as 3,800 gold bullion bars. * Clownfish, cuckoo wrasse, groupers and anthias all can change gender during their life. * There are over 400,000 litres of water behind the scenes that house over 40 species. * Lungfish have developed a lung from their air bladder in order to survive out of water. * The largest fish is the whale shark, which grows to 15m long and weighs over 20 tonnes! * The oceans sunfish lays the most eggs of any fish; over 300 thousand in one go! * A tuna can swim 100 miles in a single day! * The aquarium produces 30,000 litres of seawater every week. * The River Thames has over 110 different species of fish and invertebrates living in it and new ones are discovered annually. ...read more.

The Moon Jelly can be found in large swarms of other jellyfish that feed on plankton. Lion Jellies can have tentacles sometimes longer than a whale, while Umbrella Jellies are only an inch wide and can live in warm and cold waters. Jellyfish move through the ocean waters with pulsating bodies that are comprised of 95% water, protein and mineral salts. Jellyfish can be as small as a pencil eraser or have tentacles that reach 100 feet from their squishy bodies. Of the 200 jellyfish species, 70 of them produce stinging cells that can sting a human being. Small poison filled cells are ejected when a jellyfish comes into contact with another organism. Jellyfish are predators of shrimp and other small marine animals; they use their stinging ability to stun their prey. By the end of our visit I was pleased and proud of myself that I had made an excellent decision of exploring "Underwater" as the aquarium gave me a lot of ideas for the theme, "Underneath and Overhead". I was satisfied I had seen what I planned to and was glad to see my sisters enjoying themselves too. It is not cheap to visit the London Aquarium, but it is worth every penny. Nowhere else in London can visitors come face-to-face with sabre-toothed sharks, encounter a frenzied piranha feed, and stroke friendly rays and starfish. ...read more.