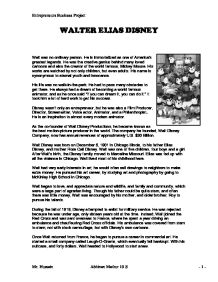 WALTER ELIAS DISNEY Walt was no ordinary person. He is immortalized as one of America's greatest legends. He was the creative genius behind many loved cartoons and also the creator of the world famous, Mickey Mouse. His works are watched by not only children, but even adults. His name is synonymous to eternal youth and innocence. His life was no walk-in-the-park. He had to pass many obstacles to get there. He always had a dream of becoming a world famous animator, and as he once said "If you can dream it, you can do it." It took him a lot of hard work to get his success. Disney wasn't only an entrepreneur, but he was also a Film Producer, Director, Screenwriter, Voice actor, Animator, and a Philanthropist. He is an inspiration to almost every modern animator. ...read more.

During the fall of 1918, Disney attempted to enlist for military service. He was rejected because he was under age, only sixteen years old at the time. Instead, Walt joined the Red Cross and was sent overseas to France, where he spent a year driving an ambulance and chauffeuring Red Cross officials. His ambulance was covered from stem to stern, not with stock camouflage, but with Disney's own cartoons. Once Walt returned from France, he began to pursue a career in commercial art. He started a small company called Laugh-O-Grams, which eventually fell bankrupt. With his suitcase, and forty dollars, Walt headed to Hollywood to start anew. After making a success of his "Alice Comedies," Walt became a recognized Hollywood figure. On July 13, 1925, Walt married one of his first employees, Lillian Bounds, in Lewiston, Idaho. ...read more.

Walt also became a television pioneer, Disney began television production in 1954, and was among the first to present full-color programming with his Wonderful World of Color in 1961. Like all great men, Walt had a fault. He was a chain smoker. After many years of chain smoking cigarettes, he was diagnosed with lung cancer. His health began to deteriorate, causing him to suffer cardiac arrest. He died on December 15, 1966 at 9:30am, ten days after his 65th birthday. But even after his death, his spirit lived on and his legacy continued. Walt Disney is a legend; a folk hero of the 20th century. His worldwide popularity was based upon the ideals which his name represents: imagination, optimism, creation, and self-made success in the American tradition. He brought us closer to the future, while telling us of the past, it is certain, that there will never be such as great a man, as Walt Disney. ?? ?? ?? ?? Entrepreneurs Business Project Mr. Hussain Abhinav Mathur 10 S - 1 - ...read more.