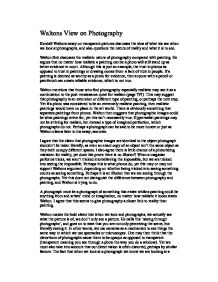 Waltons View on Photography Kendall Waltons essay on transparent pictures discusses the idea of what we see when we look at photographs, and also questions the nature of reality and what it is to see. Walton first discusses the realistic nature of photography compared with painting. He argues that no matter how realistic a painting can be a photo will still stand up as better evidence in court. Although this is just an example, the trust in photos as opposed to trust in paintings or drawing comes from a lack of trust in people. If a painting is deemed as worthy as a photo for evidence, then anyone with a pencil or paintbrush can create reliable evidence, which is not true. Walton mentions that those who find photography especially realistic may see it as a continuation to the post-renaissance quest for realism (page 797). This may suggest that photography is an extension or different type of painting, or perhaps the next step. Yet if a photo was considered to be an extremely realistic painting, then realistic paintings would have no place in the art world. There is obviously something that separates paintings from photos. Walton then suggests that photographic images could be what paintings strive for, yet this isn't necessarily true. Hyperrealist paintings may not be striving for realism, but instead a type of imagined perfection, which photographs do not. Perhaps a photograph can be said to be more honest or just as Walton claims later in his essay, accurate. I agree that the claim that photographic images are identical to the object photograph shouldn't be taken literally, as even an exact copy of an object isn't the same object as they both occupy different spaces. I also agree there is little chance of a photo being mistaken for reality, yet does that prove there is no illusion? When a magician performs tricks, we aren't tricked into believing the impossible, but we are tricked into seeing the impossible. ...read more.

the photographer has less control than the painter does. Aside from darkroom adjustments, the photographer does not control every aspect of a photo, while a painter controls every brush stroke. And, as mentioned before, a photograph must be taken of something that is real, while a painting does not. As Walton mentions, in reality others may have some control over what you see, for example, pointing out something, hiding something form you, blowing smoke in your eyes, similar though perhaps to less of an extent than the photographer has, but a painter has far more control. Perhaps a photographer allows us to see something more than we would of otherwise, claims Walton. Yet why is it that a painter does not also? Walton then discusses the use of photographic conventions. Both photography and reality involve symbols that one must understand the meaning of to understand an image. Yet I believe there is a difference. Someone who doesn't understand about reflection may not realise what they are looking at in a mirror yet they are still looking at their own reflection, or seeing themselves through the mirror. Yet when looking through a photograph one must understand photographic conventions, not the nature of reality and illusion. When looking at a photograph of a mirror, one must understand the conventions of the mirror and the conventions of the photograph. Can a line be drawn between the two, and is it important that there are more conventions to the photograph that to reality? Walton seems to believe not. If looking through a distorted mirror is still seeing, then surely looking through a distorted camera can still be. In a photograph, any distortion can be understood if you know what to look for, and you are still seeing through to something real. I mentioned before that photography adds a new set of distortions to reality on top of the original ones, but this may not be necessarily true. ...read more.

I think this is an irrelevant example as it would be like admitting seeing through a mirror is not seeing, because at any stage that the white page has black on it, it ceases to be white and becomes grey. Yet Warburton believes seeing through a mirror is seeing, so the example is therefore irrelevant. I think Warburtons methodical way of going individually discussing different ways of seeing and comparing them to photography to prevent us from 'sliding down a slippery slope' is more effective than Martins as it gets down to more important issues. He describes seeing as having a direct causal relationship to the object. Seeing a star may bee seeing into the past yet we are seeing the direct light of the object, just that they are so far away that the light takes millions of years to reach us. To see also requires a direct time relation to the event, even if its looking into the past, we see it in the same order as events took place. Photographs have no time relationship to the event. Yet there is a limit to the amount of information the human eye can pick up at any particular time, for example, a bullet moves so fast that you can't see it. This suggests that, like a film, the brain picks up intermittent pictures that, put together, look like a constant flow of information. So possibly a photograph is like one of these pictures. If so, then perhaps Walton could be right in that you look through photographs into perhaps one frame of information, perhaps as you would look at one frame in a film reel. An important point that both Warburton and Martin did not comment on was the difference between photographs. Although they have reason to believe that Walton was wrong in his belief that we see through photographs, I think that and equally important part of his argument involved the difference between photographs and paintings, in which he makes a good argument. ...read more.