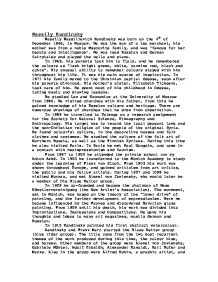 Wassily Kandinsky Wassily Wassilievich Kandinsky was born on the 4th of December 1866, in Moscow. He was the son of a tea merchant, his mother was from a noble Muscovite family, and was 'famous for her beauty and intelligence'. He was read Russian and German fairytales and played the cello and piano. In 1869, his parents took him to Italy, and he remembered the colours as "lush bright green, white, carmine red, black and ochre". His unusual ability to remember colours stayed with him throughout his life. It was his main source of inspiration. In 1871 his family moved to the Ukrainian capital Odessa, soon after his parents divorced. His mother's sister, Elizabeth Ticheeva, took care of him. He spent most of his childhood in Odessa, taking music and drawing lessons. He studied Law and Economics at the University of Moscow from 1886. He visited churches with his father, from this he gained knowledge of his Russian culture and heritage. There are numerous drawings of churches that he drew from observation. In 1889 he travelled to Volenga on a research assignment for the Society for Natural Science, Ethnography and Anthropology. ...read more.

Here he became influenced by the Fauves and discovered Bavarian glass painting. From 1909 until his death, his work was divided into Improvisations, Impressions and Compositions. He gave his thoughts and ideas to many art magazines, mostly German and Russian. In 1910 Kandinsky painted his first abstract watercolour. Kandinsky and Franz Marc started the Blaue Reiter group (blue rider group). The title came from the two most recurrent themes of the work produced during this time, the colour blue, and horses. Other members of the group were Alexei von Jawlensky, Gabriele Munter, Adolf Erbsloh, Alexander Kanoldt, Karl Hofer and Macke. Also in the group were Alfred Kubin, a graphic artist, and French Cubist Henri Le Fauconnier. The group's aim was to 'express spiritual realities in their work'. Kandinsky and Marc created an almanac, which included pictures and articles by Kandinsky, Marc and Macke. There were reproductions of works by Klee, Kubin, C�zanne, Matisse, Delauney, Picasso, Rousseau, Kirchner, Nolde, Kokoschka and Arp. Also included were compositions by Schonberg, Alban Berg and Anton Wobern. The group held two main exhibitions in Munich, one showing more than 300 works. ...read more.

During this time his work became more geometric, but still had images from his earlier work. In 1924 he became a co-founder of the group Der Blauen Vier (the blue four), with Feiniger, Klee and Jawlensky. The group was attacked 1922, in order to attack the Bauhaus School. In 1926 he published his book 'Point and Line to Plane' While he was teaching at the Bauhaus he lived next door to Klee, and in 1926 Klee wrote an appreciation of Kandinsky in a Dresden gallery exhibition catalogue. After teaching he lived in an apartment in Neuilly-sur-Seine, near Paris, until his death. In his apartment he had little contact with the art world and a quiet social life. His studio in Neuilly was often visited by Miro, Arp and Magnelli. In his studio his work became less geometric and gained more atmosphere, and started to use fine sand in the pigment. With the exception of Miro and Arp, he thought the Surrealists were "vulgar", and described their work as "commercial". In 1936 he took part in an exhibition in New York, and another in Paris in 1937. His last work was a piece entitled 'Tempered Impulse'. He died from cerebrosclerosis on the 13th of December, 1944, aged 78. ...read more.