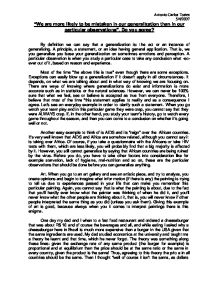 We are more likely to be mistaken in our generalization than in our particular observations&quot;. Do you agree?

"We are more likely to be mistaken in our generalization than in our particular observations". Do you agree? By definition we can say that a generalization is: the act or an instance of generalizing. A principle, a statement, or an idea having general application. That is, we you generalize you base your generalization on sometimes emotions and perception. A particular observation is when you study a particular case to take any conclusion what-so-ever out of it, based on reason and experience. Most of the time "the above title is true" even though there are some exceptions. Exceptions can easily blow up a generalization if it doesn't apply in all circumstances. It depends, on what we are talking about and in what way of knowing we are focusing on. There are ways of knowing where generalizations do exist and information is more accurate such as in statistics or the natural sciences. However, we can never be 100% sure that what we feel, see or believe is accepted as true from everyone. Therefore, I believe that most of the time "this statement applies to reality and as a consequence I agree. Let's see an everyday example in order to clarify such a statement. When you go watch your team play and in this particular game they were crap, you cannot say that they were ALWAYS crap. ...read more.

My dad studied economics at the university and taught me a theory he learnt and that time, which he never forgot. The theory was something along these lines: given the exchange rate of any same product (the burger for example) is proportional and at equilibrium than the price should be at the same ratio or the same in every country, given the product is the same! Thus, agreeing to this theory the price in all countries should be the same. Then I thought "well of course it isn't the same, as dollars are worth more than reais, and it's not at the same ratio either" I asked him why. He said this isn't true in all case as there are countries that aren't as developed as the USA and therefore can't supply the exact same ingredients as the ones the burger demands. Due to this fact, countries like Chile for example, have to import these extra ingredients so the burger can taste the same (it is not even close). Importations increase the value of your products, as you have to pay to get them in your country, so to compensate prices are put higher. Another influence that differentiates the price from one country to another is the power of its economy; in the USA for example the prices are put at whichever value the government wants. ...read more.

Slums are usually characterized by urban blight." It is not all favelados who are like this, the big majority of them work for their living, for example my maid, and she also lives in a slum. I can assure you that only a few majority of the people living in these slums are criminals. This news made some decent "favelados" angry with the journalist and this made them protest with big posters and all, saying that not all, live that way. Easily in the case, it can be said the generalization are, in fact mistaken, when not observed particularly. Overall, we can "generalize" (haha) by saying generalizations can be correct, yes, but never 100%, as there will always be an odd one out to change this view to another completely different one. When we generalize, we can commit mistakes easily, as maybe there has been a lack of studying of the subject, or a lack of particular observation which for me can be considered more accurate and precise, as there is a wider view of the matter being studied, and the majority of the time we can proove these observations, if they are done correctly. Also, there are things we say where no-one can contradict this, so its considered very "true". So, my answer to this essay title is YES: We are more likely to be mistaken in our generalization than in our particular observations. Word Count: 1352 ?? ?? ?? ?? Antonio Carlos Tostes 5/4/2007 ...read more.