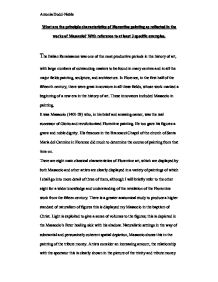 What are the principle characteristics of Florentine painting as reflected in the works of Masaccio? With reference to at least 3 specific examples.

What are the principle characteristics of Florentine painting as reflected in the works of Masaccio? With reference to at least 3 specific examples. The Italian Renaissance was one of the most productive periods in the history of art, with large numbers of outstanding masters to be found in many centres and in all the major fields painting, sculpture, and architecture. In Florence, in the first half of the fifteenth century, there were great innovators in all these fields, whose work marked a beginning of a new era in the history of art. These innovators included Masaccio in painting, It was Masaccio (1401-28) who, in his brief and amazing career, was the real successor of Giotto and revolutionized Florentine painting. He too gave his figures a grave and noble dignity. His frescoes in the Brancacci Chapel of the church of Santa Maria del Carmine in Florence did much to determine the course of painting from that time on. There are eight main classical characteristics of Florentine art, which are displayed by both Masaccio and other artists are clearly displayed in a variety of paintings of which I shall go into more detail of three of them, although I will ...read more.

Last of all there is a clear innovation and development of mathematical system of perspective. This particular attribute is portrayed strongly in many pictures of Masaccio's , trinity, evangelic annunciation and ucceo flood. For my first charactersitic in which I will look more in depth into will be the Innovation and development of mathematical and scientific system of perspective. In the Renaissance, art and science were closely connected. Both the artist and the scientist strove for the mastery of the physical world, and the art of painting profited by two fields of study that may be called scientific: anatomy, which made possible a more accurate representation of the human body, and mathematical perspective. Perspective in painting is the rendering on a two-dimensional surface of the illusion of three dimensions. Of these paintings I am going to look at the trinity dated about 1427, in which we can observe the grandeur of the figures, the dramatic unity of the composition, and the sense of controlled movement imparted through the attitudes and gestures of the persons depicted. We see also Masaccio's command of aerial perspective, which was something new. ...read more.

Finally the last characteristic I am going to look at is clearly shown in the painting of the expulsion from Eden dated 1425. the characteristic I am going to discuss is the depiction of emotions and human feelings shown in the picture. On thefar left, we see his ability to render figures in movement. Again, the background is almost void of scenery, with only a portion of the gate showing. The emphasis is on the agony of the two human figures of Adam and Eve, as they're given the boot by the angel above. There is no doubt about Masaccio's ability to render the figure realistically and with excellent 3D modelling. the crouching and bent double posture created the feeling of no confidence and despair. It has also produced a very realistic look of anguish and misery on both of the humans faces. The other figure in this painting is the angel which is clearly coming down and chasing them with sword encouraging them to walk away. In conclusion from looking at these examples and referring to paintings it is very easy to see that Masaccio has grasped the new Florentine characteristics and clearly displayed them on a variety of his paintings. As well as using the new Florentine methods he has also developed them additionally. Antonia Dodd-Noble ...read more.