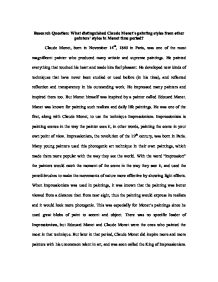 What distinguished Claude Monet's painting styles from other painters' styles in the Monet time period?

Research Question: What distinguished Claude Monet's painting styles from other painters' styles in Monet time period? Claude Monet, born in November 14th, 1840 in Paris, was one of the most magnificent painter who produced many artistic and supreme paintings. He painted everything that touched his heart and made him feel pleasant. He developed new kinds of techniques that have never been studied or used before (in his time), and reflected reflection and transparency in his outstanding work. He impressed many painters and inspired them too. But Monet himself was inspired by a painter called Edouard Manet. Manet was known for painting such realism and daily life paintings. He was one of the first, along with Claude Monet, to use the technique Impressionism. Impressionism is painting scenes in the way the painter sees it, in other words, painting the scene in your own point of view. Impressionism, the revolution of the 19th century, was born in Paris. ...read more.

Monet used the term "Impressionism" in one of his paintings called, Impression, soleil levant. It was a view on Le Havre in the mist in 1872. Monet painted all kinds of landscapes, especially in the open air. He encouraged many other painters to do so too, because whenever he painted in the open sky it made him feel free and so emotional, which encouraged him to keep on painting. Monet started to focus his paintings on more descriptive details and landscapes when he met Eug�ne Boudin in 1856. Eug�ne Boudin believed that a painter must work outside in order to capture the essence of the true beauty of nature, to catch more details and the mood of nature. Boudin was much known for this statement, which has influenced Monet's life in painting. With all the techniques and advice he has gotten from previous painters, Monet developed into a true dramatic artist. ...read more.

Monet decided to pain this scene because he was fascinated by the beautiful change of sky, the shimmering water, and the bizarre shapes in the background. Because many painters and people didn't know much about Impressionism, the painting was laughed at and ignored. Many threats were sent to this painting, because other painters found it an embarrassing painting. Normally, now a day, these threats would not matter much, but then it became very revolutionary and it was highly threatening for the bourgeoisie and the newspapers. As seen in this painting, Monet loved the water and the effects it made to the atmosphere. All his life he has been trying to paint every glimpse he sees of any sorts of magnificent effects such as reflection and transparency. Impression, soleil levant was only his first example. One other exquisite painting of Monet was the Le D�jeuner. Monet symbolizes his happiness in his life by painting his son, Jean Monet, sitting on the ground and playing, and his wife, Camille, who appears in the background. ...read more.