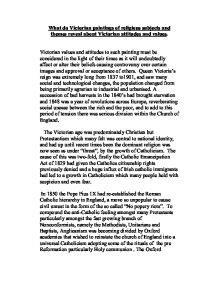 What do Victorian paintings of religious subjects and themes reveal about Victorian attitudes and values.

What do Victorian paintings of religious subjects and themes reveal about Victorian attitudes and values. Victorian values and attitudes to such painting must be considered in the light of their times as it will undoubtedly affect or alter their beliefs causing controversy over certain images and approval or acceptance of others. Queen Victoria's reign was extremely long from 1837 to1901, and saw many social and technological changes, the population changed from being primarily agrarian to industrial and urbanised. A succession of bad harvests in the 1840's had brought starvation and 1848 was a year of revolutions across Europe, reverberating social unease between the rich and the poor, and to add to this period of tension there was serious division within the Church of England. The Victorian age was predominately Christian but Protestantism which many felt was central to national identity, and had up until recent times been the dominant religion was now seen as under "threat", by the growth of Catholicism. The cause of this was two-fold, firstly the Catholic Emancipation Act of 1829 had given the Catholics citizenship rights previously denied and a huge influx of Irish catholic immigrants had led to a growth in Catholicism which many people held with suspicion and even fear. In 1850 the Pope Pius 1X had re-established the Roman Catholic hierarchy in England, a move so unpopular to cause civil unrest in the form of the so called "No popery riots". ...read more.

In later works Millais steered towards main stream subject matter, and achieved wealth and respectability by painting stirring historical scenes, society portraits, and sentimental pictures of children and lovers. He continued to paint pictures on religious themes but fitting in with the mind frame of the time. This abandonment of Pre-Raphaelite principles angered some of its members who thought Millais had sold out to public opinion and profitability. One of Millais's most popular works was 'A Huguenot on St Bartholomew's Day, refusing to shield Himself from Danger by Wearing the Roman Catholic Badge,' inscribed by the artist 1852. This was based on an incident that occurred in Paris in 1572.The painting shows a Catholic girl trying to persuade her Protestant Huguenot lover to escape the massacre by binding a white cloth around his arm thus identifying himself as a Catholic and saving himself. But while one hand holds the head of his beloved the other hand tries to pull away the cloth, the implication being that he would rather die than deny his faith. The inspiration for this painting was based on a verse from Meyerbeer's opera Les Hugenots performed regularly at Covent Garden since 1848 which Millais had recently seen. Victorians were very keen on the symbolism denoted by certain plants and flowers. This so called language of flowers was put to good effect by Millais in this painting; Ivy covering there wall can stand for friendship in adversity, the Canterbury bell in the bottom left side represents constancy or faith and the nasturtiums, patriotism or loyalty. ...read more.

The painting was sold for its full asking price of 300 guineas by the eminent naturalist W.J .Broderip. In later years when dialectic paintings had fallen out of fashion, Hunt wrote; 'In a letter to J.E. Phythian(MAG) Hunt explained his reluctance 'to force the moral' of the painting as he must have realised that too intellectual interpretation would deflect attention from the work's sensual, physical qualities.' Parris Tate Gallery pub. 1984. To give you an idea of how a contemporary art critic reviewed this work, a critic in the British quarterly review of August 1852 remarked; 'the very reflectiveness of Hunt inclines him a little more than might be wished to conceptions of his own having a doctrinal purport' Another of Hunt's paintings achieved international recognition and became one of if not the most famous religious painting of its day. Although it was not received well initially at the 1854 Royal Academy exhibition probably because of its unconventional treatment of the subject matter, the risen Christ, it went on to become a Protestant icon and a copy of it, by Hunt was presented to St. Paul's Cathedral by Charles Booth in 1908. The June Art Journal of 1854 criticised Hunt for realising the ideal; 'The knocking at the door of the soul is a spiritual figure of such exaltation that it must lose by any reduction to common forms'.. Ruskin defended Hunt and in a letter to the Times explained the symbolism at length, and concluded that it was 'one of the noblest works of sacred art ever produced in this or any other age'.Parris 1984. ...read more.