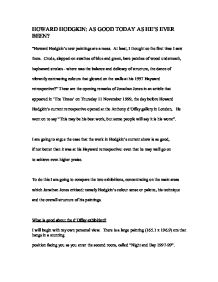 What is good about the d'Offay exhibition?

HOWARD HODGKIN: AS GOOD TODAY AS HE'S EVER BEEN? "Howard Hodgkin's new paintings are a mess. At least, I thought so the first time I saw them. Crude, slapped-on swathes of blue and green, bare patches of wood underneath, haphazard strokes - where was the balance and delicacy of structure, the dance of vibrantly contrasting colours that glowed on the walls at his 1997 Hayward retrospective?" These are the opening remarks of Jonathan Jones in an article that appeared in 'The Times' on Thursday 11 November 1999, the day before Howard Hodgkin's current retrospective opened at the Anthony d'Offay gallery in London, He went on to say "This may be his best work, but some people will say it is his worst". I am going to argue the case that the work in Hodgkin's current show is as good, if not better than it was at his Hayward retrospective: even that he may well go on to achieve even higher praise. To do this I am going to compare the two exhibitions, concentrating on the main areas which Jonathan Jones critised: namely Hodgkin's colour sense or palette, his technique and the overall structure of his paintings. What is good about the d'Offay exhibition? I will begin with my own personal view. There is a large painting (165.1 x 196.9) cm that hangs in a stunning position facing you as you enter the second room, called "Night and Day 1997-99". Its thick, broad frame quickly sweeps you up and holds you in its power: a light, bright green and a warm yellow intermingle around the frame and border, behind them cadmium red, turning to orange and yellow on the right, balanced by a greyish swirl of colour on the left. ...read more.

The frame is much more separate from the picture than usual. The green, almost monumental structure appears to be quite far back in the picture plane, and this effect is emphasized by the blue of the background - which clearly reads as 'blue sky'. Hodgkin builds up his paintings often over a period of several years, and during this time layers and layers of paint are laid onto the wooden panels, usually leaving spaces where previous layers are allowed to show through. 'Memories' 1997-99 is a good example of this. (colours and how they work) What of the frame itself? In 'Evening Sky' the edge or border of the table is separated by a narrow join, but is emphasized by the use of the bright green. Here in 'After Degas', we have seen how a frame can be used in the more traditional way - as something separate from the picture, but providing a way of looking at it. "The End of the Day" 1999. A title that can be read in a number of different ways. Is it as it sounds - a depiction of a particular time of day, or is it 'the end of the artist's day? Maybe he is feeling more vulnerable now "..he admits that he's getting older and feels a need to do things." Jonathan Jones. The frame is "swathed in an oily black" JJ which "creeps in over the painting", gradually obsuring light and colour and life".JJ. Hang on a minute, what about the intense, vibrating colour relationships inside this frame. There is a strong feeling of 'push and pull': a hedonistic, optimistic centre waiting to burst out. ...read more.

links with 'Piano lesson' - see newspaper article. 'After Matisse' COLOUR - FAUVES LAYERING - own techniques brush techns./splodging/pattern/dynamics 'When did we go to Morocco', 'In Rutland Gate', 'Chez Stamos'. FRENCH TRADITION v.ENGLISH conflict. Tradition. FRAME - PHYSICAL dark border/ Bright, part of ptg. 'Patrick Caulfield in Italy', and 'Patrick in Italy'. FRAME - PSYCHOLOGICAL MODERNIST/POSTMODERNIST/OUTSIDER influence of Hayward exhib.on HH picture surface. HANGING AUDIENCE Language v.visual END OF WORK - especially 'End of Day'. 'Come back Dull Care' relationship with career - end? Vagueness of some titles. Quote p32 mid. 'at his boldest, as well as most vulnerable'. (?1999 exhib.cat.) Absence of colour - darkness - 'Sunset', 'Dark Mirror'. END ON UPBEAT NOTE - BRING MAIN POINTS TOGETHER FROM 'END OF DAY'. COLOUR SYMBOLISM or not quote from Maria's book, mention very dark pics. CONCLUSION (Colour History has not been included - use bits in different sections). [First of all, let's think about the colours he chooses. Hodgkin painted 'After Matisse' in 1995-99. It is one of a sequence of occasional homage paintings (such as 'After Corot', 'Morandi', 'After Degas') Strangely the palette he chooses is not that of Matisse, with whom we are much more likely to associate red (such as in 'Red Studio' 1911) or blue ('Blue Window 1912 or 1913). Therefore he must be choosing colours that are more concerned with the mood of Matisse's work - colour as an equivalent of attitude. It is an expression of the way that Hodgkin uses colour as capturing a feeling or emotion, rather than in any literal sense. This is linked with memory, and will be discussed later on. To look back again at the colours in 'Evening Sea': they are harmonious, analogous and cool, and Hodgkin feels no need to set them off with something complimentary or warmer.] ...read more.