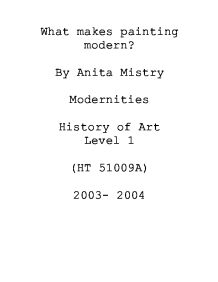 What makes painting modern? By Anita Mistry Modernities History of Art Level 1 (HT 51009A) 2003- 2004 To many art historians, modernism began in the Renaissance period, with Modernist thinking, although, it only really began to take shape in the 18th Century. Modernist thinkers didn't just want to imitate ancient models. Eugene Delacroix (1798-1863) and Jean-Auguste Dominique Ingres (1780-1867) best demonstrate the difference between the progressive modernists and the politically conservative ancients. Ingres was painting 'beautiful' paintings that were identified with the classical academic style, whereas Delacroix's style was labelled as 'ugly'. This was most probably due to the subject matter of contemporary life with some anarchistic and materialistic elements thrown in. From Delacroix, progression brought us to Gustave Courbet (1819-1877) and Edouard Manet (1832-83). These modern painters painted scenes from everyday life, the poor, and the prostitutes. In doing so they were continuously pointing out all the social problems in their contemporary society, which these artists believed should be dealt with. Some critics even perceived at the time that Manet was ahead of his day. Manet is considered to be the first modern painter; he really pushed his painterly techniques and subject matter to the limits. This was advice he got from Charles Baudelaire, a French poet and critic who started writing art criticism. ...read more.

And this was a breakthrough. Manet also worked hard to achieve a raw effect with the bold blobs of colour, although the public didn't want to be able to se brushstrokes. With this painterly technique, Manet was letting the viewer see "the hand of the artist"1, and this was a break with tradition. The nude here was named Victorine Meurent, and she was Manet's most favourite model. So much has been said about this painting and its model. What was so startling was the way in which Manet depicts his model to be staring out at the viewer with such frankness2. (Manet also does this again in Olympia). She seems to be inviting the viewer into the painting, maybe even challenging the viewer. This would have caused much tension when publicly displayed, because many of the upper class bourgeoisie men viewing the piece would have had encounters with prostitutes, and this painting was like a reminder, as if to say, 'Here I am!'. Manet has painted her in such a way that we are told that she is definitely a domesticated woman, and not a nymph or a goddess, as a Classical nude isn't what you would call 'naked', whereas this is. Manet doesn't use all the usual codes for depicting the nude and doesn't abide by the rules of composition. ...read more.

The sharp contrast between the woman's pale body and the background, and black maid, makes the viewer acutely aware of the nude and her intimidating stare which would have caused the viewers of the Salon of 1865 increasing discomfort. From looking closely at just a few of Manet's most famous works, I have been able to see what makes painting modern. Manet demonstrates modernity in his work in many different ways, and the juxtaposition of which makes his paintings modern. The painterly techniques and the content of his work are essential. The way in which he makes his paintings flat and two dimensional, is evident in Olympia. In Un Bar aux Folies - Bergere, his typical imagery of contemporary life is evident. Depicting these types of scenes is seen as very modern because it hadn't been done before with such vigour. Modernity is all about the new, bringing about a change. This is what Manet was doing with his subject matter. And finally, another modern aspect in Manet's art is shown in Le Dejeuner sur L'Herbe. When painting the nude he doesn't even try to use any codes to show she is a nymph or a goddess. His blatant disregard for her nudity was revolutionary and shocking at the same time in 19th Century Paris. Manet broke with tradition here also by not making clear what the painting was narrating, and leaving his paintings look to the public as if they were unfinished, although this was all done intentionally. ...read more.