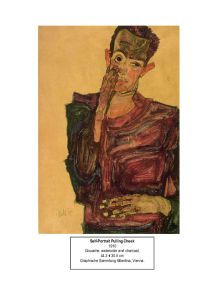 When I look at this portrait, the first thing that hits me is the way the artist, Egon Schiele, appears to have made himself look

When I look at this portrait, the first thing that hits me is the way the artist, Egon Schiele, appears to have made himself look animated, like a cartoon. The way in which his right eye is rounded like a cartoon character and his left eye is squinting and almost shut, adds to the idea of a the portrait being a cartoon. The squinted left eye is as if he is sneaking around and evaluating his surroundings. If you cover the right side of the face (with the widely opened eye), it makes you realise that the left side with the squinted eye does not look very lifelike, but the two eyes seem to cancel each other out. The over exaggerated wrinkles on Schiele's face and neck make him look a lot older than he actually is. He was actually only 20 years old when he painted this portrait but the way in which he was exaggerated the wrinkles makes him look around 40 years old. ...read more.

His letters make it plain that he suffered from a degree of persecution mania (a feeling that others have evil designs against one's well-being) - for example, he wrote in a letter of 1910: 'How hideous it is here! Everyone envies me and conspires against me. Former colleagues regard me with malevolent eyes.' This information could back up the idea that Schiele was making himself look older in the paintings and look animated because he actually felt old, and the fact that the left eye is squinting as if looking around and being paranoid could also be due to his persecution mania at the time. The portrait is basically just an artist's self-portrait. Around this time, Egon Schiele became fascinated by his own appearance, and made self-portraits in large numbers. This is one of those portraits. The title does not give away any clues to the meaning or symbolism of the piece, it is just called "Self-Portrait Pulling Cheek". ...read more.

He also used watercolour for a lighter paint, and charcoal probably for the darker, shaded area of the clothes etc. In 1907, Schiele met his idol Gustav Klimt. Schiele showed him some of his drawings and Klimt liked them a lot. Klimt took an interest in Schiele and his work, and often bought some of his drawings and offering to exchange them for some of his own. This must have made Schiele feel good, to have one of his idols take an interest in his work. In 1909, Schiele left the Academy of Fine Arts after completing his third year. He found a flat and a studio and set up on his own. During this time, Schiele showed a strong interest in pubescent young children, especially young girls, who were often the subject of his drawings. He made many drawings from these willing models, some of which were extremely erotic. Schiele seems to have made part of his income by supplying collectors of pornography. Nowadays, this would be seen as illegal, and would almost definitely be frowned upon by most of the public. ...read more.