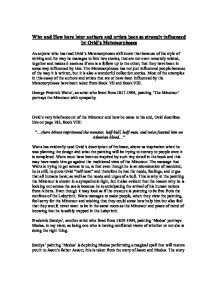 Why and How have later authors and artists been so strongly influenced by Ovid's Metamorphoses As anyone who has read Ovid's Metamorphoses will know that because of his style of writing and the way he manages to link two stories, that are not even remotely related, together and makes it seem as if one is a follow up to the other; that they have been in some way influenced by him. The Metamorphoses has not just influenced people because of the way it is written, but it is also a wonderful collection stories. Most of the examples in this essay of the authors and artists that are or have been influenced by the Metamorphoses have been taken from Book VII and Book VIII. George Fredrick Watts', an artist who lived from 1817-1904, painting 'The Minotaur' portrays the Minotaur with sympathy. Ovid's very brief account of the Minotaur and how he came to his end, Ovid describes him on page 183, Book VIII: "...there Minos imprisoned the monster, half-bull, half-man, and twice feasted him on Athenian blood..." Watts has evidently used Ovid's description of the beast, above as inspiration when he was planning the design and what the painting will be trying to convey to people once it is completed. ...read more.

Medea says that she can rejuvenate his father without taking some of Jason life. So Medea goes and travels all over to get the herbs and other things that she needs to rejuvenate Aeson and creates a potion out of the herbs and then she uses the potion to rejuvenate Aeson. The only description of Medea we get is of her hair when she is performing the rejuvenation of Aeson on page 162: "...while Medea herself, with streaming hair..." Obviously this does not tells us very much about what she looks like, but we are also told that she meant to be very beautiful. Sandys had to use artistic licence in his painting. The way that Sandys finally chose to portray Medea is probably because he used Ovid's Metamorphoses as inspiration. Ovid portrays Medea as being a sorceress, so Sandys may have decided to bring the idea of her being a sorceress and what she would look more up-to-date to what she would look like in his time; thus the reason for of why she very strongly resembles a gypsy. Medea physical appearance in it self makes her look like a gypsy and the way Sandys has clothed her makes her look even more like gypsy; especially how she is wearing so much jewellery. ...read more.

When, through the help of the virgin princess, Ariadne, by rewinding the thread, Theseus, son of Aegeus, won his way back to the elusive threshold..." Though the Labyrinth has been transformed into a garden maze is quite clear that the Artist has been inspired by Ovid; the woman who looks like she is waiting outside the garden maze, i.e. the Labyrinth, is I think meant to be princess Ariadne who was Minos' daughter. In the top right hand corner you a ship sailing with black sails, this is representing the time when Theseus is sailing back to Athens from Crete, he forgot to replace the black sails, which meant that he had died, with white sails, which meant that he had succeeded in killing the Minotaur and that he was alive. When his father saw the ship returning with the black sails up he threw himself off a cliff, and fell to his death, not changing into a bird like some of the other people who had fallen off a cliff in Ovid's Metamorphoses. In conclusion, I think that I could mention many more people that have been influenced by Ovid but due to the word limit I cannot. Everyone is inspired differently, for some only need a small passage others need a long detailed passage. I believe that I have displayed both of these qualities. ...read more.