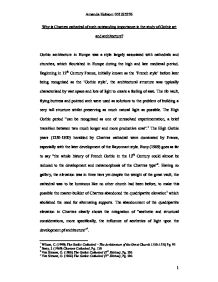 Why is Chartres cathedral of such outstanding importance in the study of Gothic art and architecture?

Why is Chartres cathedral of such outstanding importance in the study of Gothic art and architecture? Gothic architecture in Europe was a style largely associated with cathedrals and churches, which flourished in Europe during the high and late medieval period. Beginning in 12th Century France, initially known as the 'French style' before later being recognised as the 'Gothic style', the architectural structure was typically characterised by vast space and lots of light to create a feeling of awe. The rib vault, flying buttress and pointed arch were used as solutions to the problem of building a very tall structure whilst preserving as much natural light as possible. The High Gothic period "can be recognised as one of unresolved experimentation, a brief transition between two much longer and more productive eras".1 The High Gothic years (1250-1300) heralded by Chartres cathedral were dominated by France, especially with the later development of the Rayonnant style. Bony (1969) goes as far to say "the whole history of French Gothic in the 13th Century could almost be reduced to the development and metamorphosis of the Chartres type"2. Having no gallery, the elevation was in three tiers yet despite the weight of the great vault, the cathedral was to be luminous like no other church had been before, to make this possible the master-builder of Chartres abandoned the quadripartite elevation3 which abolished the need for alternating supports. ...read more.

In the fourteenth century "churches which adopted the immense windows invented at Chartres were being called 'lanterns', an image surely intended to evoke not only the light emitted from between the bars of a lantern but also the roles of saints as spiritual beacons" 9. In omitting the gallery the master-builder was able to achieve the "principle of translucent walls in all parts of the building...[he could also]...give greater height to the side aisles as well as the clerestory windows" 10 therefore the side aisles of Chartres "illuminated be large windows, became a luminous foil enveloping the nave" 11. The famous Blue Virgin window which was completed in the twelfth century completes one of the most complete collections of medieval stained glass still in existence. With the symbolism and decoration of the stained glass windows, it makes the Chartres cathedral especially unique for the study of art, this is heightened by the fact that this the only cathedral from the High Gothic period with the original stained glass windows in place. There is a Gothic tendency to merge together "mathematical with the ornamental [which can be seen] in Chartres cathedral and it is most apparent in the three great roses"12. The rose, designed with geometrical influences is made with bar tracery to divide up the sections of glass. ...read more.

Traced on the body of these angular sculptures is a mass of longitudinal fine lines indicating the creases in garments, and emphasising their stretched height. In most cases the two sides of their sombre faces form almost complete symmetry. On the other hand on the northern portal you see examples of High Gothic sculpture. These figures are far more realistic in their proportions and their faces and movements are altogether more animated than those on the central portal, which appear to be more part of the structure of the actual building. These contrasting examples of Gothic sculpture and can be seen around the ornate cathedral at Chartres; subsequently it makes the cathedral important in the study of art and in particular sculpture of the Gothic period.17 The 'French Gothic' design as shown in Chartres and then evolving from the Chartres design influenced cathedrals being built all across Europe during the Rayonnant period. The cathedral of Notre Dame at Chartres is an influential Gothic cruciform cathedral built upon Romanesque foundations, and was known as one of the first High Gothic buildings to be completed; bringing together the entire vocabulary of High Gothic together with its flying buttresses, stained glass and ornamental sculpture. Because Chartres is one of the original Gothic cathedrals and has influenced so many of the later High Gothic and Rayonnant period cathedrals it is of great importance to the architects interested in the history of Gothic sculpture. ...read more.